In Memory of Jean McConville 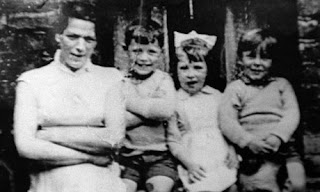 I’m generally quite a controlled person. I do get angry but I prefer not to let emotions get the better of my judgement. I prefer to look at things in a detached manner, especially items on the news which have little direct bearing on my life. But sometimes my guard slips. It did at the weekend after I read a story by Amanda Forman in The Observer. It concerns a nobody; it concerns a woman who was turned into a nobody: it concerns Jean McConville.

Perhaps you’ve never heard of her. I hadn’t until I opened the paper. She’s dead now; she’s been dead for years, her remains long incarcerated in a hidden grave. She was a victim, the victim of an IRA murder squad, who kidnapped her in front of seven of her children from their home in West Belfast in the winter of 1972. Their father was already dead and they were never to see their mother again. Sent to orphanages, they were told a malicious lie – that she had deserted them.

Jean McConville was a victim long before those IRA thugs took her. A Protestant by birth, she married one Arthur McConville, a Catholic, converting in the process. But this just made her a double outcast, rejected by the Unionist Community and suspected by the Nationalist. She and her husband both suffered repeated sectarian persecution. Forced to move from place to place, they finally ended up in the Falls Road. After her husband’s death from cancer in 1971, Jean’s position, already bad, became intolerable. When her neighbours reported that she had been seen aiding a wounded British soldier she was taken away by an armed gang, never to be seen alive again.

We now know that she was tortured prior to being murdered; that she was beaten with such force that her bones broke and her hands were mutilated. After she was shot in the back of the head, death in the well-practiced Moscow style, she was taken over the border and buried on Shelling Beach in County Louth. For the next thirty years, as Forman says, the IRA denied that they had anything to do with her disappearance.

The murder was only the beginning of the crimes against Jean McConville. It was almost as if she had never existed, that she did not matter, that her disappearance did not matter. The then Royal Ulster Constabulary did not even trouble themselves to record the complaint of her abduction. More than that, they refused to accept that she was even missing, insisting on the basis of an anonymous tip-off (no real need to guess from whom) that she had absconded with a British soldier.

That would have been that but for the fact that a silent witness turned up. In 2003 the earth gave up its secret when a storm washed away part of the Shelling Beach car park, finally exposing her body. The IRA now admitted responsibility for the crime, justifying the act on the basis that she had been an ‘informant.’

It was only now, after years of shocking negligence, that the authorities began to take the matter seriously. Robert Carswell, the Lord Chief Justice, ruled that, in the circumstances, the government should break its neither confirm or deny policy on such intelligence matters, to reveal if there had been any secret dealings with Jean McConville. There were none. In 2006 Baroness Nuala O’Loan, the police ombudsman for Northern Ireland, ruled that she had never been an agent at any time, that she was “an innocent woman who had been abducted and murdered.”

The police have apologised for their negligence. The IRA, an organisation I hold in the deepest contempt, has also offered a hypocritical, self-serving ‘apology’, saying that it “regrets the suffering” caused to Jean’s family. Remember, most of them were small children, including six year old twin brothers, when their mother was taken as they screamed and cried.

Jean McConville is just one among the legion of the lost, totally unimportant then and too insignificant now to derail the so-called peace process, which has seen terrorists enter government in Northern Ireland. But justice, unlike law, never sleeps; justice bleeds from open wounds. We now know who exactly was responsible for ordering Jean’s abduction and murder. He is Gerry Adams, president of Sein Fein, accused by former confederates, the same man who is about to enter the politics of the Republic, who is standing for the Dail for County Louth, the same place where Jean was hidden all those years ago. I fully share Foreman’s disquiet;

Ireland is a member of the International Criminal Court whose charter clearly states that the definition of a war crime includes the murder of civilians in “an armed conflict not of an international character”. Thus a man who is alleged to be a war criminal, who is alleged to have broken the law in one of the worst crimes in Irish and Northern Irish history, is poised to become a governor and make that country’s laws.

There are so many things done for the sake of expediency, but this can be pushed too far, even for peace. To reach any accommodation with a wretch such as Adams, to vote for a wretch such as Adams, to breath the same air as a wretch such as Adams would be too much for any normal human being, anyone who entertains even the most elementary concepts of moral rectitude and justice. Jean McConville, friendless and isolated, murdered for no good reasons, an uneducated woman without connections, a victim of the worst kind of prejudice, is his abiding legacy. Like Foreman I will not forget. This blog is dedicated to her memory.
Posted by Anastasia F-B at 16:01