Reservations of the mind 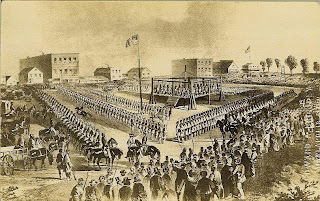 The sound of the death song reached the ears of the crowd, assembled behind the infantry and cavalry squadrons deployed by the army, that and the sound of hymns and the chants of dancing. There, in the centre, arranged on a large square gallows with nooses around their necks, stood thirty-eight men. Soon the trap doors would open in what was to be the largest mass hanging in American history.

One of those destined to die that day was called in his own language We-Chank-Wash-ta-don-pee, better known as Chaska. Like the rest he was a Dakota Sioux. Unlike the rest his name was not on the death list. It was December 1862, the day after Christmas, almost one hundred and fifty years ago in the settlement of Mankato in Minnesota, one of the new states of the Union but still very much on the frontier.

It had been a difficult year for the white settlers. People were angry and vengeful, several hundred of their number having died, many massacred. In the summer of that year the local Sioux, driven to desperation by hunger, began a systematic attempt to drive the intruders from their traditional tribal lands, an uprising to be known as the Dakota or Little Crow’s War. By December the conflict was over, with some 1000 Indians now in the hands of the US Army. Of this number over three hundred were convicted of rape and murder by military tribunals, condemned to death after trials which in some cases lasted no more than five minutes, conducted in a foreign language, the accused without any kind of legal counsel, unaware, even, that they faced a capital charge.

The matter was passed to President Lincoln for review, clemency urged by some, retribution by others. It’s yet another measure of this man’s greatness and compassion that, despite the pressures he was under, the terrible pressures of the Civil War, he took the time to consider each case, taking care to distinguish between legitimate acts of war and outrages committed against civilians.

In the end he commuted the death sentences of two hundred and sixty four men. Some of the people of Minnesota, in their anger over this act of mercy, turned against Lincoln’s Republican Party, which did not fare as well in the Presidential election of 1864 as it had in 1860. When the adverse electoral consequences were pointed out the President is said to have replied “I could not hang men for votes.”

But thirty-eight did hang. Justly or not, the injustice of the process itself has meant that questions never went away, particularly over the execution of Chaska, for whom no death warrant had been signed. Recently James Oberstar, an outgoing congressman for Minnesota, told The New York Times that his death was a wrong that should be righted, possibly by a gesture from the US Congress itself. Now Al Franken, the junior Senator from Minnesota, has taken up the cause, hoping to right an old wrong. Franken, formerly of Saturday Night Live, is a comedian as well as a politician, words that can be used for once without sardonic intent!

There are those, of course, who go further; there are always those who go further. For the white community of Minnesota the Dakota War and the Mankato hangings, just or not, are really just part of a distant and unhappy past. But as the 150th anniversary approaches Sioux activists are describing the mass execution as an act of ‘genocide.’

Words are so important, the meanings they carry are so important. Some words should only be used with the greatest of care, least they be worn away to nothing, all meaning smoothed out. I have no doubt at all that many of the native peoples of the United States suffered greatly in the nineteenth century, under pressure from the steady expansion of white settlers, the actions of buffalo hunters, from repeated bad faith and broken treaties, and the behaviour of corrupt Indian Agencies.

I also have no doubt that there are instances where tribal communities were taken to the threshold of extinction in what might very well be described as genocide, but to talk of the Mankato hangings in such terms seems disingenuous. Shameful, perhaps, unjust, certainly, but ‘genocide’ is an emotional step too far. It’s evidence of a victim mentality that would seem to be such a part of Native American (I hate such expressions) collective consciousness, a reservation, if you like, of the mind.
Posted by Anastasia F-B at 16:41