I don’t believe it! 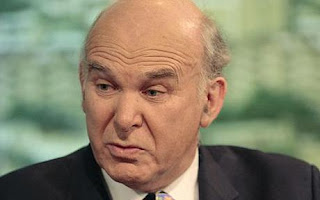 Who is he, you might wonder, if you live anywhere firth of Chiswick, or you are not a member of the Liberal Democrat Party. The short answer is that he is a British politician, a leading member of our present coalition government. If you’ve ever seen One Foot in the Grave, the British sitcom, he is the spitting image both in appearance and attitude of Victor Meldrew, the show’s grumpy old man, forever saying ‘I don’t believe it’ when confronted with the outrages of contemporary life.

Uncle Vince is the Business Secretary, a man with extensive powers. More than that, he is the king maker, the power broker, the man who could exercise the ‘nuclear option’ and bring down the government. At least that’s how he likes to depict himself to young female reporters from The Daily Telegraph, who rather caught him with his metaphorical trousers around his scrawny old ankles, secretly recording some of his more pompous and impolitic assertions on tape.

Today the poor old King Maker is just a little less powerful than he was, having been stripped in a rather humiliating fashion of his responsibilities for overseeing media, telecom and broadcasting companies. This comes after he told the girls (cue the giggles) that he had ‘declared war’ on Rupert Murdoch, the media tycoon, and that he was ‘going to win’.

Sorry, Vince, you lose and you lose big style. His remarks were a response to the attempt by Murdoch’s News International to acquire a majority shareholding in British Sky Broadcasting. It’s a move that would have to be sanctioned by the Business Secretary but in an impartial fashion, without obvious political and personal bias.

Now Cable has made his politics and his bias all too obvious. In any normal circumstances the stupid old man would have been rusticated, but this would only upset the balance of power in the government to the detriment of the Lib Dumbs, something David Cameron, the Prime Minister, is clearly anxious not to do.

It’s the same old story, it truly is. It comes not long after Mike Hancock, another Liberal Democrat, another silly old man in public life, was revealed to have employed an alleged Russian spy as an aide, while asking all sorts of sensitive questions about national security. The individual in question was a forty-year old man called Boris. No, he was not; she’s a twenty-five year old woman called Ekaterina! There is only one lesson here: keep old men out of politics or keep them away from young women. Which is the easier? Let me just leave you to make up your own mind. :-)
Posted by Anastasia F-B at 16:03