Don’t ask me what I think of you 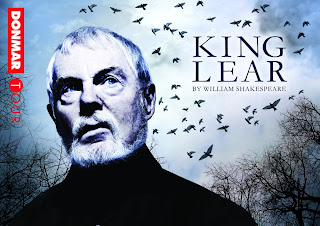 I have a beastly cold, one that came on suddenly towards the end of last week. No matter; cold or no cold, nothing could stop me going to see Derek Jacobi perform King Lear at London’s Donmar Warehouse on Saturday, my tickets having been bought long since!

Charles Spencer, in his Telegraph review says that Lear is perhaps the greatest of all Shakespeare’s dramas. Oh, Charles, why so mealy-mouthed? Drop the qualification and damn the devil: it is the greatest! It is also arguably the most demanding part of all, far more demanding than Hamlet or Macbeth and slightly more demanding than Othello. It requires considerable maturity for an actor to carry the role off well, descending by stages from the conceited king to the broken man, old before he was wise. Jacobi, quite simply, is outstanding, full of emotional intensity. Behold the king, behold the man, behold the actor.

And there is Cordelia, wonderfully played by Pippa Bennett-Warner, perhaps the one female character in Shakespeare that I identify with most (well, there is Lady Macbeth, but I think I’ll just keep quiet about that!). I would be Cordelia; I would not flatter; I would tell the simple honest truth without hope of gain, because truth here is the test of virtue. Don’t ask me what I think of you I might not give the answer that you want me to. She does not give the answer that her father wants her to, unlike Goneril and Regan, hypocritical and self-serving harpies; and Gina McKee as Goneril was a particularly scheming harpy, the perfect wicked sister! Lear disinherits Cordelia, casting her out, only to discover all too late that her stark honesty contained the greater love.

Lear is a play about despair, tragic and unrelieved despair. Indeed the message was so stark that previous generations simply could not tolerate the heart-break: it conflicted too much with established notions of poetic justice. In the early 1680s it was rewritten in a version by Nahum Tate, a future poet laureate, in which Lear does not die, the wicked sisters are punished, and Cordelia marries Edgar. Amazingly this version was still playing on the English stage as late as 1838. But now we can despair at be at enmity with false hope; now we can feel the raw emotion.

The production by Michael Grandage is tremendous- precise, taut, unadorned, all adding to the intensity of the words, more sound less fury. Christopher Oram’s stage design, stark in the extreme, adds so well to the overall effect of the performance. There is nothing excessive here, nothing that distracts from a full understanding of the unfolding tragedy. I was sniffing at the end. I assure you, it had nothing to do with my cold.
Posted by Anastasia F-B at 15:13