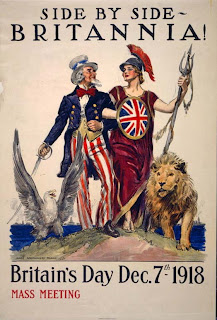 Just imagine living in Britain in the late sixth century AD. I use the word Britain here in a purely geographical sense because, politically speaking, there was no Britain. Still, you are a cultured person, one of the few who can read and write, an ever diminishing talent in this Dark Age; you have an idea of Britain. For you it is a Dark Age; for you the light went out over a century before, when the last Roman legion left the province of Britannia for ever.

You live in a twilight world, pushed ever further to the west by Germanic invaders from across the North Sea. These are the people who will create a new land; these are the Angles, the people who will, in time, create Angle-Land, but you don’t know that; you are looking to the past, to vanished greatness, to Rome. Come on, be honest; you are a Tory, are you not? You have to be to see anything positive in empire; at least you have to be according to the New Statesman, a repository of the stalest left-wing ideas, as well as a refuge for jolly bad writers!

Forgive me; I’m having a spot of fun here at the expense of the tiresome Laurie Penny, who gives us “pop culture and radical politics with a feminist twist”, at least that’s what the New Statesman says she gives us. Earlier this year she wrote an article berating the terrible Tories for, in her words, wanting children to be proud of Britain’s imperial past. That’s a terrible thing, don’t you agree, just like my hypothetical ancient Briton’s nostalgia for the order and security of Rome?

The occasion for Penny’s penniless thoughts was the decision by Michael Gove, the Education Secretary, to invite Niall Ferguson, a ‘right-wing colonial historian’ (he must be; Penny says so), to help revise the school history curriculum to – horror of horrors – say something positive about the British Empire. Do you know anything of Fergusson? You should do if you read The Independent, the most boring newspaper on this planet, where Johann Hari, in his capacity as the “young bloodhound of the liberal left” (Penny again) exposed him as the “court historian for the American hard right.” In other words he’s a decent historian and a jolly good writer!

Gove’s sins get worse. He’s decided it’s time – please sit down if you are of a nervous disposition – to celebrate Britain’s achievements, including the achievements of empire. Not only has Ferguson been invited to offer a contribution so, too, has Andrew Roberts, another right-wing monster, who has “dined with South African white supremacists, defended the Amritsar Massacre and suggested that the Boers murdered in British concentration camps were killed by their own stupidity.” I expect he likes to drown puppies for a spot of relaxation.

I’m a Tory but I’m no apologist for empire. More than that, in some ways I think that we might have been better off without it, better off without its heavy legacy, better off without the expense. But it happened and in so many ways it’s a good thing that it happened. The United States of America is the greatest legacy of the British Empire, the power house of the English-speaking world, created by English constitutional principles. And then there is modern India which, though some may like to deny this, owes its political existence and its present prosperity to the fact that it also forms part of that same English-speaking world.

I so tired of the Pennies of this world, tired of small intellectual change. It’s just so typical of the left, this perpetual negativity. Bad things happened, bad things happened in the course of British expansion across the globe, just as they happened in the course of Roman expansion across the ancient world, but so many positive things emerged, so much that contributed to the advance of civilization. It’s a story worth knowing and a story worth repeating. Not so, says Penny, it’s all about ‘social control.’ What a pity she wasn’t around to offer her fatuous opinions to my ancient Briton.
Posted by Anastasia F-B at 15:21