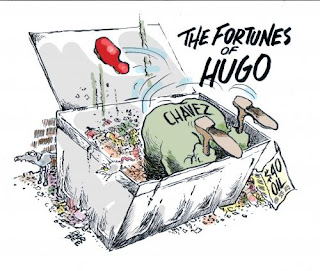 A spectre is haunting Venezuela – the spectre of Chavez. Unfortunately, apart from the miserable people of his miserable utopia, no power is united against him. Last September his party was defeated in the legislative elections but that has done nothing to stop the progress of the beast, currently engaged on a campaign of grand larceny, sorry, make that nationalisation. Property is theft, so said Pierre-Joseph Proudhon, the French granddaddy of anarchism. So clearly Hugo the Horrible is busy returning his country to a natural state of virtue, with him as the only thief, a truly noble sacrifice.

The problem is not everyone sees it that way. Chavez is moving against what he is in the habit of referring to as “the oligarchy”, getting a bit of an edge in before the hostile legislature meets for the first time in January. I have no idea what shape the ‘oligarchy’ takes in the recesses of this man’s mind but it must include the workers who have openly protested against his campaign of economic ‘liberation’. These poor, benighted souls simply do not know what is good for them, so the national guard has been trotted out to make sure they acquire a quick education.

It’s not only industry that is effected, with property seizures coming at a moment’s notice, often after no more than a sudden announcement on television; a fairly major land grab has also been underway for some time. So far some 3million hectares of farmland have been seized, with a further 450,000 to follow in the course of the coming year. Farms are simply taken with little or no compensation, on very much the same basis as Mugabeland, another earthly paradise.

Where there is socialism there is disaster, it follows with the same logical certainty of a proposition in geometry. It seems to me to be something perverse in human nature for people, even deeply stupid people like Hugo Chavez, to follow this proletarian road to ruin. It is a road to ruin, evidenced, once again, by the Venezuelan example: the more property that is seized the less productive it becomes. Take the example of the food industry, much of it in government hands in an attempt to ensure what is called “food sovereignty.” I have no idea what that means exactly but it seems to involve a major increase in imports. Food shortages, declining productivity, housing shortages and power black-outs, all in an oil-rich country. Welcome to the future; welcome to Hugoland.

I’ve been following the career of the Dear Leader for a while now. Perhaps you have, too? If so you will have rapidly reached the same conclusion as me: Hugo is too stupid to walk and chew gum at the same time. So, is there ideological éminence grise here, it’s only fair to ask? No, not really; just a Trotsky manikin and – look you - he’s Welsh! His name is Alan Woods, a self-professed a Trotskyite, as well as an informal advisor to El Presidente.

If you’ve seen Monty Python’s Life of Brian you may recall the People’s Front of Judea. If so you will know the Woods type, the forms of language weird beards like him prefer, polytechnic-speak, it might be called. He has been publicly urging Chavez to respond to the setback of September by “accelerating the revolutionary process”, meaning get on with nationalisation, Comrade Boyo, look you. Poor Venezuela; things can only get worse. They are only a step or two away from Welsh choirs and a welcome in the hillside.