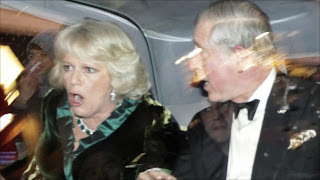 As the carriage made its way along the highway the royal couple within were subject to repeated insults. Ugly faces pushed through the windows, spitting on the prince and tearing the dress of his wife. The mood within was one of fear, shock that there was so much violence and brutishness in the world, shown at its worst in the nation’s capital. Here the obscenities and the abuse issued freely. It was only with difficulty that the escort kept the foul mob at bay.

No, it’s not what you are thinking. This is not London and the people in question are not the Duke and Duchess of Cornwall. They are Louis XVI and Queen Marie Antoinette returning from Varennes in the summer of 1791, the furthest point they reached in trying to escape from the excesses of the French Revolution. But when I saw the look of fear on the Duchess’s face as the royal car was attacked last Thursday by those brutish ‘students’ it occurred to me that this must have been the same expression that appeared on the face of the divine Marie Antoinette all those years ago. 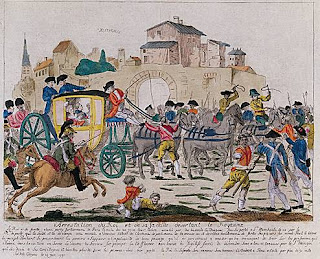 Who would have believed that our capital could have been desecrated in this fashion; who would have believed that a loathsome mob could have attacked the future King of England and his wife; who could believe that a British citizen could have swung on the flag on the cenotaph, the nation’s most sacred symbol, like an ape, or another urinate on the statue of Sir Winston Churchill, the nation’s greatest wartime leader? We must have gone back in time and imported the sans-culottes of 1791, stinking, animal-like, corrupting the air with their rotten halitosis. They’re still at work, this Varennes mob, on the Guardian comments website, posting remarks like “fuck Churchill” and describing the attack on Charles and Camilla as “hilarious.”

I have a busy life. I try to keep up with the news, though it’s not always possible. So, I have a question about quite an important item that I’ve clearly missed. Can anyone tell me, please, when the Metropolitan Police were replaced by the Keystone Cops? To lose control in one riot may be regarded as a misfortune; to lose control in both looks like carelessness. No, Lady Bracknell is far too mild: it looks like utter incompetence, like comic stupidity, if only the possible consequences were not so serious.

Sir Paul Stephenson, Keystone Cop-in-chief, sorry, make that Commissioner of the Metropolitan Police, says that the protection officers, some of whom were armed, showed “enormous restraint and good judgement.” We now know that one of the beasts leaned through an open window and stabbed the sixty-three year old Duchess with a stick.

What if it had been a knife? How did these officers know that it was only a stick? What, exactly, are the circumstances in which they would draw arms if not this? Are they so afraid of the political fall-out that they are effectively numbed into inaction? Just imagine what would happen if an American President had been attacked in this fashion. The individual in question would have been shot dead even before he managed to poke his stick, of that I have not the least doubt. With a clot like Stephenson in charge of royal security, of the security of visiting heads of state, personal incompetence has turned into national embarrassment.

Every bullet which leaves the barrel of a police pistol now is my bullet. If one calls this murder, then I have murdered: I ordered all this. I back it up. I assume the responsibility, and I am not afraid to do so.

You may recognise this quote; if not these are the words of Herman Goering, a statement issued shortly after he became Prussian Minster of the Interior in 1933. I suppose the Stephenson version would be that every bullet that does not leave the barrel of a police pistol is a sign of his ‘remarkable restraint.’ I hope we are better prepared to deal with rabid mobs, ‘students’ or whoever they are, in the difficult times ahead. With a man like this in charge I’m not at all confident.
Posted by Anastasia F-B at 15:54