Excess, the true meaning of Christmas 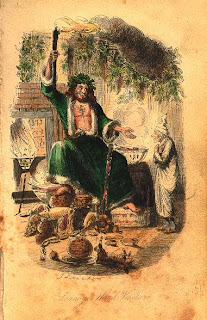 Christmas fast approaches. Here we are, now in the second week of December. I’m slightly worried; I’m concerned that another tradition may be dying: I’ve yet to see a press article bemoaning the ‘commercialisation’ of the festival, or hear some finger-wagging moralist droning on about how we have all forgotten the ‘true meaning’ of Christmas, meaning the Christian meaning!

I’m sure that just about everyone who visits this page knows very well that there is no scriptural evidence for the date of Christ’s birth. December 25 was alighted on several centuries later because, by happy coincidence, it was a traditionally happy time in the Roman world, the height of Saturnalia and the birthday of Sol Invictus, the sun god. The festival was always about excess, so Christians have no cause for complaint!

The puritans, both in England and parts of the American colonies, recognised that Christmas, idolatrous anyway because of it’s popish overtones, was a holiday with pagan roots. So they banned it; they banned everything associated with it, all those things that add a little pleasure and warmth to the deep mid-winter.

This attitude did not die away with Cromwell and Cotton Mather. Edmund Gosse, the English poet and author, was brought up in the strict Plymouth Brethren sect; so absolutely no Christmas joy for him. There is a hilarious passage in Father and Son, his memoir published in 1907, where he details how the servants, feeling sorry for him, gave him some of their own hidden Christmas pudding. He ate it, only to be overtaken by a crisis of conscience. Father, on being informed of this dreadful sin, immediately threw the remainder of the “idolatrous confectionary” into the rubbish!

The Americans gave the world Santa Claus in his modern benign, jovial and anodyne guise. But England gave the world an older figure - Father Christmas, Old Christmas himself, who celebrates the coming of Christ in a boozy, self-indulgent fashion. He is not a gift-giver, simply the spirit of good cheer, yet another pagan intrusion. The most memorable depiction of the old boy is to be found in Dickens’ A Christmas Carol. There he is, illustrated by John Leech, as the Ghost of Christmas Present, an Odin-like figure.

As for the supposed ‘commercialisation’ of Christmas that, too, is nothing new. It wasn’t the Bible that gave us Christmas; it was Charles Dickens. The central message of A Christmas Carol, once the moral homily is taken away, is that Christmas is about having a jolly good time among family and friends; and having a jolly good time meant buying things, lots of food and lots of drink. No, I’m wrong: it wasn’t Dickens at all – it was the Ghost of Christmas Present, who comes with clouds of plenty in his wake. Who comes, I suppose, with Christmas presents.

For the emerging middle class in general Christmas was really their festival: the more they celebrated the harder the workers had to work, the greater the incentive for spending, the greater the incentive for commercialisation in a new commercial world. The old tradition of simple good cheer, the tradition of Father Christmas himself, was drowned in a rising flood of consumerism. And as the festival expanded so, too, did consumer culture, which steadily worked its way through all classes as Christmas made its progress from the nineteenth to the twentieth century.

So, let’s have no more nonsense about the ‘true meaning’ of Christmas. Christmas is about spending, eating and drinking to excess; in its modern form it always was. Charles Dickens would have understood as much. Waes Hail.
Posted by Anastasia F-B at 16:25