The valley of death 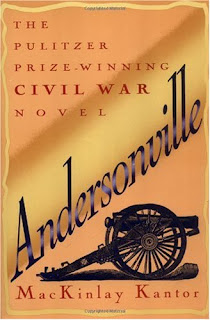 Try to imagine a place worse than Dachau. It’s impossible, you say. Then imagine, if you will, Dachau just as overcrowded but without the huts, without a clean water supply, without any kind of sanitation; just a palisade with watchtowers around an open field. Imagine people, thousands of people, suffering in confined conditions under an open sky, winter and summer, the only source of water being a marshy stream which rapidly turns into a sewer, a breeding ground for maggots and disease. This is not Germany; this is not Dachau. This is America; this is Andersonville.

Thanks to Ike Jakson, a fellow blogger, I’ve read Andersonville, the 1955 Pulitzer Prize winning novel by MacKinlay Kantor. It’s set during the American Civil War, for the most part in and around Andersonville, a prisoner of war camp near the town of Anderson in Georgia, which opened in February 1864. In just over twenty-six acres thousands of Union prisoners were penned as in a zoo, with no shelter other than their own rough shebangs, holes dug in the ground, covered with blankets or coats propped up with sticks. In the year or so it was open an estimated 45 thousand men passed through its gates; almost 13 thousand never passed out again, other than to the grave, dead of malnutrition, neglect, malaria, diarrhoea, scurvy and gangrene.

Andersonville is a powerful novel, one of the most powerful I’ve ever read, and I say that without a trace of exaggeration. Kantor spent years on background research, evidenced in his writing, material he handles with ease, fully digested, unlike so many other historical novels. It could, given the subject, have been an angry book, a bleak book, but it’s not; it’s a book full of gentle understanding and humanity. There are parts that are difficult to read, there is real horror, but there is nothing lurid, nothing overstated in Kantor’s treatment. 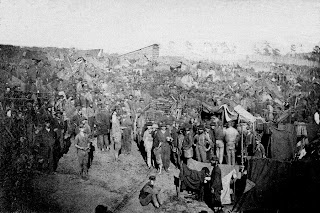 It’s a mixture of fact and fiction, a mixture of real people and wholly believable characters: unforgettable characters like Ira Claffey and his daughter Lucy, who live on a plantation close to the camp, and Nathan Dreyfoos, a cultured man, a Union prisoner, carried to Andersonville by chance and fate. There are others, large and small, people the author takes from their homes and guides them through his pages, sometimes invisible, other times not. It’s a story, in so many ways, of intersected lives and intersected destinies.

In Dachau the Nazis imposed a brutish order, with guards in the camp and designated block orderlies. In Andersonville, or Camp Sumter, to give its official name, there was no order or policing. The authorities stayed outside for the most part, allowing the prisoners to manage the best they could. The worst was a kind of jungle, a Darwinian struggle of the strong against the weak.

For me this was the most depressing part of the story, that predatory gangs known as Raiders organised themselves to steal from their already impoverished comrades, not stopping short of murder. This is not fiction; this really happened and it continued to happen until other prisoners formed their own police force, the Regulators, imposing a kind of order in the midst of misery. The order went so far as trying and condemning the leaders of the Raiders, a process carried out with the cooperation of the camp authorities.

The authority, the person with immediate responsibility for Andersonville, was one Captain Henry Wirz, of Swiss German origin, the only person convicted and executed after the Civil War of what we now refer to as war crimes. Kantor does not condemn him, no; he merely presents him as a self-pitying, ineffectual and rather wretched little man, an obvious scapegoat. His greater culprit is General John H Winder,responsible for the whole of the Confederate prison system, depicted as a callous and brutish individual who, along with his son, is alleged to have deliberately engineered death by neglect.

It’s as well to remember, though, that Andersonville is a novel, not a history. In the spirit of poetic licence some liberties are taken with the facts. There is not the least doubt about the callous indifference with which many of the Confederate authorities perceived the Union prisoners, but the camp opened at a time when the Southern state itself was dying; at a time when supply was breaking down, when shortages were commonplace; a time when even soldiers in the field went hungry. This is not to excuse what happened at Andersonville, to excuse the dehumanisation, merely to offer a wider understanding.

Of the dozens of novels I’ve read this year Andersonville is by far the best, only equalled by Vassily Grossman’s Life and Fate, by coincidence another account set against a background of war. Kantor writes in a lucid and compelling fashion, a narrative that quickly engages and carries one along. He writes in a wholly believable way about wholly believable people. Some books are instantly forgettable, no matter how enjoyable. This is a book that cannot be forgotten, one destined to leave a perpetual afterimage in my mind. 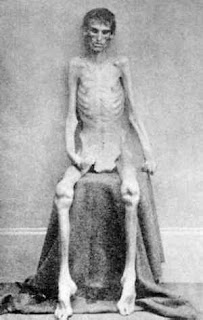 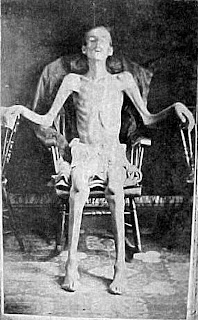 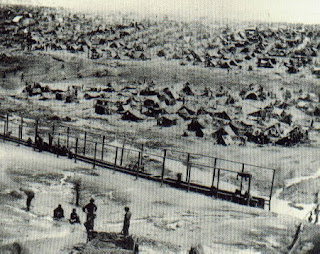