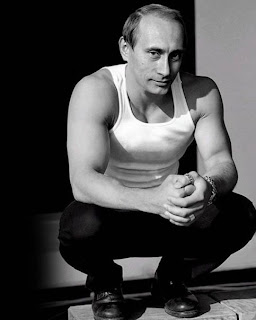 “Flash, I love you, but we only have fourteen hours to save the earth.” These immortal words by Dale Arden came immediately to mind in reading a report in the Times on Friday about Obama’s stalled nuclear arms reduction treaty with Russia. He has only three days – that was three days ago! – to persuade a single recalcitrant Republican senator to agree the plan. And if he does not, well, Premier Putin is rattling his nuclear sabre, saying in ominous terms that Russia will be obliged to “ensure its security by different means.”

Poor little Vladimir, always so keen to appear tough, even so far as being photographed in his vest, a rather absurd Slavic Rambo! Well, when I say poor I don’t really mean that he is poor, at least not in financial terms. At the head of his FSB (a new bottle for the old KGB wine) secret state, he has, so it is said, amassed billions of dollars in personal wealth, a modern example of the excessive greed that Bastiat warned of in The Law. This has come out in WikiLeaks but it’s nothing new; as long ago as 2007 Stanislav Belkovsky, a Russian political analyst, alleged that Putin was the richest man in Europe, his fortune acquired by shady energy deals, not stopping short of outright extortion and expropriation.

There really was not much in the way of virtue in the Soviet Union, but the corruption of the old Kremlin is nothing compared with that of the new. It would be interesting to know exactly by what process handbag FIFA, another corrupt organisation, awarded the 2018 World Cup to Russia, a virtual mafia state. That’s not my view, I should add, it’s the view of the State Department, revealed in leaked cables. I really had to say that just in case some plutonium assassin is preparing to make yet another journey to England.

Sorry, I just can’t help myself: I have to say a word or two more about that vest! There he is, the Russian Rambo. This sort of thing must go down well in the East. After all, they don’t do humour or satire there, or, if they do, they end up dead. Look at him, a man in his late fifties displaying himself dressed down in such a low class fashion. Just imagine if, say, Barack Obama or David Cameron disported themselves like this. The response would be waves of uncontrollable laughter, the sort of thing that greeted ‘that picture’ of Andrew Neil. But Russia is a foreign country; they do things differently there.

There was a time, though, when politicians, all politicians, were expected to dress in a sober fashion, to behave always with dignity. Friedrich Ebert, the first president of the Weimar Republic, was unwise enough to allow himself to be photographed in a swimming costume, one of those old-fashioned affairs that covered the upper body as well as the lower. Ever after he was greeted by right-wing opponents of the regime waving these costumes on flagpoles. So, if you don’t like Putin you know what to do: wave a vest on a flagpole! Yes, you could, but only if you really want to see some of the more obscure parts of the Lubyanka. :-)
Posted by Anastasia F-B at 15:53