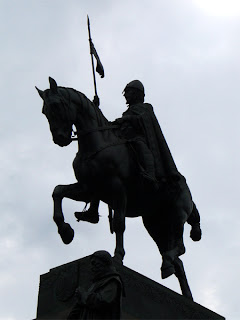 Right, hold tight: I’m about to explode a cherished seasonal myth: Wenceslas was not a king; he was not even called Wenceslas! He was Václav, duke of Bohemia. It was the Emperor Otto I who extended the regal dignity to him posthumously. This was a purely personal honour, one that only serves to confuse, especially as the real King Wenceslas I of Bohemia finally stood up in the thirteenth century!

In a recent brief article I read on Wenceslas, not the first, the original, Jonathan Pollard asks if he was good, as the carol alleges. Well, he was declared a saint and all saints have to be good! But really it’s all a question of party politics, the parties in question being Pagan and Christian. Václav was a Christian, which seems to have been the only measure of his ‘goodness.‘ He was brought up by Saint Ludmila, another goody, eventually strangled on the orders of Drahomira, Václav’s mater, a Pagan, and therefore a bad person, although there is not a trace of evidence to suggest that she was - a Pagan, that is!

The fact is the saint came from a back-stabbing, power-mad family. His mother had his grandmother murdered and he was murdered in his turn by Boleslaw, his brother, who wanted the throne for himself. Which party did Boleslaw belong to? You've already guessed, I suspect - he was a Pagan! That’s how the hagiography goes, though Boleslaw seems to have been somewhat relaxed when it came to matters of personal faith, encouraging the growth of Christianity while he was duke and asking the Pope to make Prague a bishopric, rather odd behaviour, I feel sure you will agree, for a Pagan. It gets even odder when one remembers that Mlada, his daughter, became a nun and his son of the same name was so pious that he was to be known as Boleslaw the Pious!

The murder, as Pollard says, probably had nothing to do with Václav’s Christianity or his goodness and everything to do with his pro-Holy Roman politics, which was in danger of turning Bohemia into just another province of the Empire. His retrospective kingship shows how valued he was by the imperial court, just as Boleslav’s decision to go to war soon after his succession shows that he was the true defender of Czech liberties, not his brother, rather ironic considering that it was Václav who went on to become the nation’s patron saint.

Never mind the history; you are still left with the carol, the much loved classic with words by John Mason Neale. Incidentally I made up my own version of that, one my set used to sing at school, which opens like this;

Yes, a super song, just so seasonal. There is just one tincy-wincy thing. The tune to which Neale set his lyrics is Tempus Adest Floridum (It is time for flowering), a thirteenth century carol celebrating spring. So, you see, nothing really is as it seems.