Hurrah for the Bonnie Blue Flag! 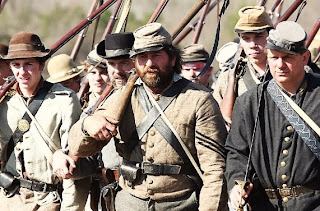 We are now close to the hundred and fiftieth anniversary of the events that led to the outbreak of the American Civil War. Southerners are getting ready to commemorate the secession on 20 December, 1860 of South Carolina, the first state the leave the Union, following the election in the previous November of Abraham Lincoln as president.

The event is to be marked by a ball, with guests expected to appear in formal wear, black tie or of the period itself, or even in pre-war militia uniform. There will also be a re-enactment of the signing of the Ordinance of Secession, with Glenn McConnell, acting president of the South Carolina Senate, playing the part of David Jamison, who chaired the 1860 convention that agreed on secession.

Other events are to follow in the course of the coming year, including a re-enactment of the swearing in of Jefferson Davis as President of the Confederate States of America in Montgomery, Alabama on February 11, 1861, an occasion to be heralded by rifle and cannon salutes.

According to a press report that I read at the weekend, civil rights groups are greeting these commemorations in a mood of outrage. Dr Lonnie Randolph, president of the South Carolina branch of the NACCP, the black civil rights group, has gone so far as to liken the coming Charleston ball to a ‘Holocaust gala.’ His organisation is planning protests, accusing the Sons of the Confederate Veterans, the body behind many of the planned commemorations, of trying to ‘rewrite history.’

Replay history, I would have thought, rather than rewrite it. There seems to be such nonsense here, a reminder of the pressure to have the Confederate stars and bars removed from state flags in the South. Yes, of course, slavery is an issue, one I dare say that still leaves a sense of grievance with some people, but the Civil War was about so much more. If anything it’s the key event not just in the history of the South but the whole of the United States, one that deserves to be remembered without rancour.

Still, when it comes to rancour, the South has its own justifiable grievances, things that are not often displayed in the way that slavery is displayed. I personally cannot perceive William Tecumseh Sherman, whatever military necessity he pursued, other than as a callous man, one who led a campaign of rapine through Georgia. If his was a war against the capacity to make war it was also a war against women and children. He may not have been directly responsible for the excesses of his troops both during and after the siege of Atlanta but he set a mood that saw wilful destruction, looting and rape, of black women as well as white.

OK, you have me; I’m biased; my sympathies are all for the South, not really a secret because I’ve made this perfectly plain in related blogs, most recently in Daughter of the Confederacy. I will repeat, though, that I think slavery was an abomination and secession an error but I simply cannot rid myself of an abiding affection for the residual romance of the Old South, based on my love, from long experience, of the New South in general and Georgia in particular. The old Confederacy has every right to remember and celebrate its past, with affection as well as regret. So, here’s to the memory of the Bonnie Blue Flag, to the memory of Mars Robert, Stonewall Jackson and Old Pete. Let’s hear it boys!