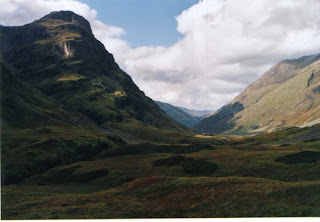 Glencoe in Scotland is a dramatic location, drama in nature, drama in history. For those who do not know the place it’s a narrow valley in the West Highlands to the south of Fort William, proceeding a few miles west from Rannoch Moor to the outlet at Loch Leven. It’s bounded by mountains on both sides, high and glowering, impassible to the north; impassable as a wall.

I’ve walked there, walked by the western gate, taking the zigzag route to the crest of the hills known as the Devil’s Stairway, part of the old military road built by General Wade in the aftermath of the Jacobite Rebellion of 1715, an abortive rising against George I on behalf of the exiled House of Stuart.

The valley itself is now best known as the setting for one of the most tragic, and misunderstood, events in Scottish history - the massacre of the local branch of Clan Donald in February 1692. Although this was part of the outward ripples that followed the Glorious Revolution of 1688, when James II was replaced by William III, from beginning to end it was an entirely Scottish rather than a British affair, one that was approved by a Dutch king for reasons of strategic and political expediency.

The scheme itself was conceived by John Dalrymple, Master of Stair, the Secretary of State for Scotland, who acted in conjunction with Thomas Livingstone, the Scottish commander-in-chief. The task was then delegated to the Earl of Argyll's Regiment of Foot, a formation on the Scottish military establishment. This regiment's Campbell associations helped give the whole affair quite spurious overtones of clan rivalry, an act of deliberate obfuscation, a myth that continues to run.

Why, then, did Dalrymple conceive of this act? Simply because he wanted a quick end to the Highland war against William, and because he was looking forward to eventual political union between Scotland and England. The one obstacle on the path of both schemes was the Gaelic peoples of Scotland's 'wild west'; and that expression is not chosen by accident. If one wishes an analogy with what happened in Scotland in 1692 one could do no better than look to the United States and the policy towards the Indian tribes of the West in the nineteenth century. I imagine Dalrymple would have shared Philip Sheridan's sentiment with a slight adaptation, in that for him the 'only good Highlander he ever saw was dead.'

There was a huge and ancient cultural gap in Scotland between the English-speaking Lowlands and the Gaelic-speaking Highlands, with hostility and misunderstanding spread along the way. For many Lowlanders the Highland 'savage' was an embarrassment, an obstacle to progress and civilization. James V had pressed for the wholesale extirpation of the people of Clan Chattan, who had given him particular offence; and James VI had advanced a scheme for Lowland settlement in the Hebrides, based on the extermination of the local people, MacLeods and MacDonalds. These hostilities were compounded by the rise of Jacobitism, which divided the Lowlands of the south still further from the Highlands. In 1692 hatred, racism and the politics of cultural contempt finally acquired a practical and murderous form.

It’s a while now since I was last there but the place leaves an abiding memory, a memory of old, unhappy, far off things and battles long ago.