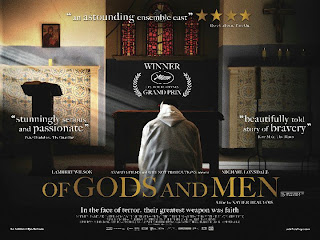 I have said, Ye are gods; and all of you are children of the most High.
But ye shall die like men, and fall like one of the princes.


Of Gods and Men (Des hommes et des dieux) tells of the final tragic days of a small group of French Cistercian monks living in a community in North Africa in the 1990s, living in the midst of a civil war, overwhelmed by a rising tide of fanaticism. Directed by Xavier Beuavois, it’s an intelligent meditation on faith, doubt, commitment, courage, tolerance and resignation that justifiably won the Gran Prix at the Cannes Film Festival in May of this year. It has now been submitted for the Best Foreign Film Oscar, and given how topical the themes are, how relevant to our times, I would be amazed if it did not win.

The movie is based on a true story, that of the seven-strong Cistercian brotherhood living at the monastery of Tibharine in the Atlas Mountains of Algeria, who were kidnapped and murdered in 1996, allegedly by mujahedeen guerrillas fighting against the government, though in circumstances that are still not completely clear.

In handling the ambiguity of the story Beauvois, who co-wrote the script as well as directed, is particularly skilful. His monks are certainly under threat from the intolerance and the fanaticism of the fundamentalists. But there is also an implied threat from the government, for whom the isolated community is a political embarrassment, and from the military, in every way as murderously ruthless as their opponents. In one important scene we see the monks huddling together for comfort as helicopters churn and rattle overhead.

The acting is superb, the individual characters of the brothers conveyed with depth and sincerity. There is Brother Christian, played by Lambert Wilson, the head of the community, a thoughtful, introspective and donnish figure, and there is Brother Luc, played by Michael Lonsdale, my favourite French actor, the community doctor who runs a clinic for the local people, giving formal advice on health at one moment and informal advice on love at the next. The brothers are not evangelists; they are there simply as part of a wider world, living in harmony with the local Muslim majority, helping where the can as an act of charity, supporting themselves with the sale of their own honey, attending celebrations as honoured guests.

Harmony dies in an instant. Some Croat workers are brutally murdered by the mujahedeen. Fear spreads, among the people living in the town adjacent to the monastery, to the cloisters of the community itself. The army offers Brother Christian protection; he refuses, knowing this will involve taking sides. His refusal, taken without consultation, provokes a crisis among the others, who, in fear of their lives, question his actions and, in some cases, their vocation, wondering if it is best to seek safety in flight. This is where the drama is at its most intense, part story of suspense and fear, part dissertation on commitment and faith.

It’s impossible to overlook some of the New Testament metaphors. There is a scene of Christian on his own, walking through a flock of sheep, sitting beside a lake in contemplation, a Christ-like figure in the wilderness, struggling, perhaps, with his own self-doubt. Still later, as the brothers are reconciled to their fate, to their approaching martyrdom, there is a Last Supper scene, where they drink wine together, listening to a tape of Swan Lake, a moment of sharing and acceptance. I have to say I found this particular scene, effective as it is as a piece of cinema, too manipulative and contrived for my taste, notwithstanding the gushing remarks I’ve read in some press reviews.

For me the best scene of all comes on Christmas Eve, when the monastery is invaded by a group of mujahedeen demanding medicine and the services of Brother Luc, to be taken away to treat one of their own wounded. Christian faces them down, saying that Luc is not well enough to travel and the medicine, in short supply, is for the local children. He then draws the attention of the leader of the group to a passage from the Koran, beginning a quotation which his adversary completes. They part, shaking hands, having achieved a kind of understanding with one another.

There are no accusations in this movie, or, rather, an accusation is made, as I see it, against the nihilism which corrupts faith for its own self-serving and blasphemous ends. The part that moved me most was not the Last Supper but the final testament of Brother Christian, a voice-over against a wintry country scene, a graveyard covered in snow, an empty room and a vacant table;

Should it ever befall me, and it could happen today, to be the victim of the terrorism swallowing up all foreigners here, I would like my community, my church, my family, to remember that my life was given to God and to this country. That the Unique Master of all life was no stranger to this beautiful departure. And that my death is the same as so many other violent ones, consigned to the apathy of oblivion. I’ve lived long enough to know that I am compliant in the evil that, alas, prevails over the world and the evil that will smite me blindly. I could never desire such a death. I could never feel gladdened that these people I love be accused randomly of my murder.

I know the contempt felt for the people here, indiscriminately. And I know how Islam is distorted by a certain Islamism. This country, and Islam, for me, are something different. They’re a body and a soul. My death, of course, will quickly vindicate those who called me naïve or idealistic, but they must know that I will be freed of a burning curiosity and, God willing, will immerse my gaze in the Father’s and contemplate with him his children of Islam as he sees them.

This thank you which encompasses my entire life includes you, of course, friends of yesterday and today, and you, too, friend of the last minute, who knew not what you were doing. Yes, to you as well I address this thank you and farewell which you envisaged. May we meet again, happy thieves in Paradise, if it pleases God, the Father of us both. Amen. Inshallah.