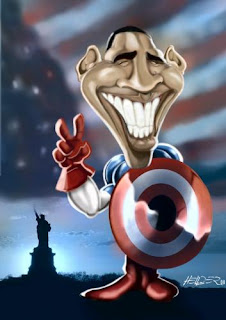 I wrote the following piece for another site not long after Barack Obama was awarded the Nobel Peace Prize in 2009. I've decided to archive it here in the light of a discussion on Blog Catalogue, and in the light of recent developments on the world stage.

Those who have read my previous blogs will know that I have little time for Obama politically. Still, I can recognise that he is a clever man, a good speaker and a public figure with a warming personality. I also thought that he had a certain degree of tactical skill. The acceptance of this award proves that he has none.

Now a word or two about the Nobel Committee. My first reaction on hearing the announcement-after thinking it must be a spoof- was that it says nothing at all about President Obama, nothing about his achievements, and heaps about them, about the obvious political bias of these people and, I would add, their desperate attempts at political correctness. It seems obvious to me that Obama is being awarded less for what he is and more for what he is not; he is not a Republican; he is not George W Bush. I also suspect that he was awarded because he is the first black American president, which, if true, is an act of appalling condescension.

But cast down in one Scandinavian capital he was raised up in another, a form of personal compensation. He did not get the Olympics but at least he got ‘Peace.’ I rather suspect that the celebrity President has not the wit to understand that he did not get peace either, that he is unlikely ever to get peace. It’s the triumph of pious hopes over solid achievements.
Posted by Anastasia F-B at 11:27