Keep out of Libya! 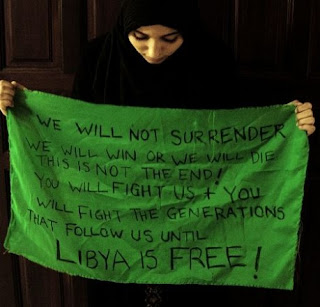 I’m beset with a sense of déjà vu. Speaking recently at the Women in the World conference, ex-president Bill Clinton, king of the liberal interventionists, called for the West to join in the Libyan civil war on behalf of the rebels. “I think we should support them”, he said, “We have the planes to make an appropriate contribution to this.”

Meanwhile, David Cameron, the British prime minister, a sort of political Mister Bean, has been seen trotting along the European corridors of power, trying – so far without a great deal of success – to get agreement on a no-fly zone and targeted airstrikes against Gaddafi’s forces. Europe, he believes, must do more to stop the Mad Colonel’s rampage against his own people.

Yes, as I have said, a sense of déjà vu. It’s Kosovo all over again; it’s Clinton in the same role; it’s Cameron pathetically trying to don the mantle of Tony Blair, Britain’s home-grown war monger. Was that a success? Well, I suppose it defends on one’s definition of success. A ruthless bombing campaign directed against civilian targets in Serbia, coupled with support for the Kosovo Liberation Army, a kind of murderous mafia headed by Hashim Thaçi, Blair’s chum, which is alleged to have smuggled heroin and cocaine into Western Europe, as well as butchering Serbs to sell their organs. The outcome was an independent and semi-criminal fiefdom in the Balkans, with Thaçi as Mr. Big. Yes, as I say, it really depends on how one defines success.

How much of this kind of self-righteous interventionism can the world take, I have to ask? How many more pyrrhic ‘successes’ must we celebrate; how many more Kosovos, Afghanistans and Iraqs? But there is more here, a more pertinent question: what business is it of ours, what business is it of Europe and America, to go dashing from here to there around the Third World setting wrongs to right? What incredible arrogance, what hubris, this displays, a nineteenth century gunboat mentality with a twenty-first century gloss of canting hypocrisy.

I have no doubt at all that Gaddafi is a ‘bad man’, a dictator, one under whom I personally would not care to live. But he is still a recognised head of state, one with whom we were quite happy to do business until quite recently. Do we know anything of the rebels? Do we know anything of their politics, other than their desire to get rid of the Colonel? Have Clinton or Cameron even paused to think what a post-Gaddafi Libya may look like? Do I need to hazard answers here?

The point is, like him or not, like it or not, Gaddafi has every right to deal with insurrection in any fashion he sees fit. Throughout history governments have taken action to contain rebellion, not excluding those of England and the United States. Yet there seems to be a special condescension when it comes to places like Libya that allows pontification over what is and what is not acceptable, schoolmasters addressing homilies to naughty children.

It’s as well to remember that we once intervened in Afghanistan on behalf of the Taliban. We intervene in places like Libya at our own peril. The last thing we should expect after the event is gratitude. That much should be obvious from the fiasco that is Iraq.
Posted by Anastasia F-B at 16:17