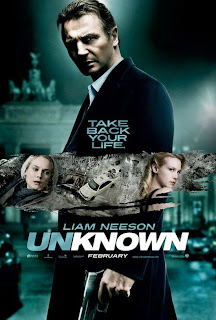 The first thing I have to say about Unknown, a Berlin-based thriller directed by Jaume Collet-Serra, is that it’s the second movie I’ve seen in the last three days with a wholly implausible script, following soon after The Next Three Days! The second thing is that it’s also quite derivative – The Bourne Identity did it all so much better.

Have I said too much already? No, I don’t think so, because it’s a little more complex than you may imagine. Yes, it’s about misplaced identity, that much is obvious from the advance publicity, though it ends with an interesting twist, unbelievable, but interesting. Nothing ever is as it seems: life is just a set of Chinese boxes. The central theme of Unknown is scary enough: are you are who you are? Can you prove who you are? What if someone else says they are you and can prove it, down to the finest detail?

Liam Neeson, my favourite mature male actor, plays Dr Martin Harris, a biochemist who arrives in Berlin accompanied by his wife (January Jones) for an international conference. He carries his documents, including his passport, in an attaché case, trusting enough to allow a taxi driver to put into the boot (trunk – for you Americans).

The taxi drives off and we cut to a lingering shot on the said case, left behind on a trolley. One just knows that this is the key to all the follows. Even before this I thought to myself, my God, what kind of idiot would let their passport off-person and out of sight? Perhaps biochemists are in a unique class of idiocy? Actually the idiocy is even less excusable, given the said Dr Harris’ true profession.

No sooner have the couple arrived at their hotel, the Adlon, of course (it’s the best in the city), than Harris realises the case is missing. Without even pausing to tell his wife, now at reception, he jumps into another taxi to take him back to the airport. But this is a bad day that can only get worse. Following an accident, the cab immediately plunges into the River Spree, knocking him unconscious and in danger of drowning. Not to worry; he is pulled free by the driver (Diane Kruger), possibly the most unbelievably glamorous cabbie ever!

After a four-day comma, Harris awakes to discover that nobody knows that he is Harris, not even Mrs Harris, who has conveniently found another Harris (Aidan Quinn), who knows as much as the first Harris; not only that but he has the edge – he can prove he is Harris, which leaves Harris in a limbo. Whew! And so it begins, a helter-skelter of twists and turns, an odyssey through the wintery streets of Berlin in the search for self, or someone who can prove the self.

It’s a scary scenario but unfortunately, given his talents, Neeson doesn’t really convince just how scary; there is just a tincy-wincy touch of autopilot in his performance. Friendless, with no papers and nowhere to go, he is fortunate in managing to obtain the assistance of one Ernst Jürgen, a private detective and world-weary former Stasi agent longing for the bad old good old days, played with consummate skill by the veteran Bruno Ganz (think Adolf, think Downfall), for me the highlight of the whole film. He also manages to link up with the taxi driver, who turns out to be a Bosnian illegal by the name of Gina, another valuable prop in his quest.

Poor Doctor Harris is certainly in need of support: not only can he not prove who he is but there are also some mysterious people on his tail, who clearly intend him no good. What we are treated to is assassination attempts followed by mandatory wild car chases through the streets of the German capital, with the police seemingly uninterested that their city is being turned into Los Angeles!

Now I hate spoilers, or reviews that do little more than rehash the plot, so I’m not going to give too much more away. I will say that the truth within the truth, or the small nonsense within the greater nonsense, is revealed when one Professor Rodney Cole (Frank Langella), turns up, a colleague who is a colleague and who is not a colleague and one and the same time, at least not in the sense that Harris thought he was a colleague, if you take my meaning, which doubtless you don’t!

I’m running away here, being too clever by half. Unknown is enjoyable enough as far as this sort of thing goes, once seen and twice forgotten. It’s hokum, that’s certainly true, but it carries one along quite nicely to the unexpected dénouement. The explosion in the real-life (and excellent) Hotel Adlon was one of the biggest surprises for me, not the sort of thing, one would have thought, that the management would like to place in the mind of some freelance crackpot. Presumably the returns, and the publicity, outweighed the caution.