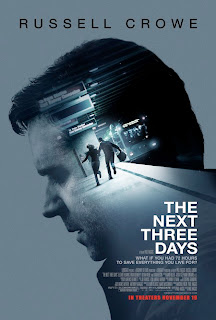 My attention was drawn recently to The Next Three Days, a 2010 thriller directed by Paul Haggis starring Russell Crowe. I don’t remember this on general release. It’s unlikely that I would have gone to see it anyway, because I dislike Russell Crowe, less for his acting abilities, much more for his loutish off-screen persona, pure prejudice on my part I freely admit.

Well, now I’ve seen it and I’m quite glad that I’ve seen it. It’s far from being a great movie – the script is far too implausible and the direction too uneven – but it is a good one, which managed to engage me on a simple emotional level. The reviews on Rotten Tomatoes are far from encouraging, many negative or lukewarm at best, which I find really quite surprising. Perhaps the consensus went out that Crowe needed a turkey.

Crowe plays John Brennan, a mild mannered college professor (Russell Crowe?!), whose wife Lara (Elizabeth Banks) is arrested for the murder of her boss. The evidence against her is circumstantial though Haggis leaves the issue of her innocence or guilt as an open question. It’s only at the very end that the matter is resolved in a series of flashback scenes. No, I’m not going to tell you; discover for yourself!

So, we now fast forward three years. Laura, tried and convicted, has been incarcerated for life in Pittsburgh’s formidable maximum security prison. John is in despair; every legal avenue has been exhausted. Nobody, seemingly not even the family lawyer, believes in Lara’s innocence; but he does, really as an act of total conviction born simply of faith and love. I have to say I was really quite impressed by the way Crowe shaped this character, perplexed and vulnerable, so far from his usual tough guy roles, though I have a caveat here which I will come to in a moment.

Bad news comes: Lara is to be transferred, which will make it more difficult for John and their young son Luke (Ty Simpkins) to come and see her, a piece of news that triggers a suicide attempt. John, as a last act, decides that his only recourse is to help his wife escape. With all the thoroughness of an academic, he begins to research the prospects, consulting one Damon Pennington (Liam Neeson), an ex-convict who managed to escape from prison, publishing a book about his experience. John is told that the most difficult part is not the escape but evading capture afterwards. He is also told that he is going to need money, lots of money, to sustain life as both out of the law and out of the country.

Money, now that’s a problem, given all the more urgency when John finds that he has less time to plan than he imagined: Laura is to be transferred in the next three days. He has a house which he can’t sell fast enough; so, what does he do? Why, just the sort of thing any home-loving, mild-mannered college professor would do – he raids a crack den and shoots up the bad guys, making off with their loot!

This is the point where the script descends into a form of parody. John is a little too handy with a gun for a literature professor, a little too controlled, a little too like, well, a little too like Russell Crowe. From this point forward one really has to suspend disbelief big time. No matter; it proceeds at a decent pace after John hits on a cracking plan, false starts all behind.

Now I’m willing him on all the way. His planning is meticulous, including a set of ‘clues’ he leaves for the police. In the end this sets them off on the wrong track entirely, though it struck to me as rather odd that they would seriously believe that an American couple with a young son in tow would make for post-earthquake Haiti!

Yes, the plot is implausible, yes, the direction is not quite as competent as it should be, but this is a decent, well-made thriller, one that does not move at a frenetic, hyper-active pace. The performances are solid, not just Crowe but Banks, unfairly putdown in some of the notices. Credible mention should also be made of some of the minor roles – Liam Neeson gives what I have come to expect of him, and Brian Dennehy, who plays George Brennan, John’s father, is always excellent value. Overall The Next Three Days is a good study of psychological pressure, of the choices that have to be made in extremis, of an ordinary man doing extraordinary things for love.