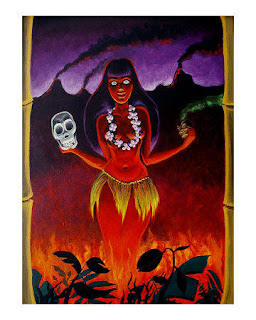 The pantheon consists of a varied and fascinating set of figures, combining elements of West-African deities and Catholic saints.

Maman Brigitte, as I have said, is the wife of Baron Samedi. Like her husband she has the power to save those hexed to the brink of death. She also likes to dance, in a highly sexual and provocative fashion.

Legba is the master of passageways, one who has the power to open the door between the natural and the supernatural worlds. Depicted as a crippled wanderer, he is also known as Papa la Bas. As with other voodoo spirits he can be both benevolent and malign. He can show the way to the lost or he can loose them still deeper.

Damballah, or La Grande Zombie, is the supreme snake deity and master of the sky, given to represent creation out of chaos. Represented by a snake biting its own tail, Damballah also represents the dualities of death and rebirth, sickness and health, and male and the female forces. His wife is Ayida Wedo, a rainbow spirit.

Marasa or The Twins represent the union of day and night, earth and sky. The Twins are also known as the Marasa Three, representing love, truth and justice. They are also associated with birth and children.

Ogou is the warrior sprit and the god of steel and iron. Considered to be of great strength, he is invoked not just in war but in all sorts of physical and legal battles. It was Ogou who is believed to have led the Haitian slaves to victory in their War of Independence.

Zaka, or the Farmer, the god of agriculture, is depicted as a machete-wielding peasant, who is usually shown wearing denim and a red scarf.

Agwe, the Master of the Sea, provides protected passageway through water.

Djab, or the Wild Spirits, are entities summoned by means of ritual, becoming the dedicated servants of a houngan-a priest-or a mambo-a priestess. They have a magical rather than a religious purpose. People will apply to a houngan or mambo to invoke their particular djab to take revenge on enemies or business competitors.

Over an above all of these deities and spirits stands Gran Met, the one God, all powerful and all knowing, but essentially remote and distant from human affairs. The Iwa, or lesser entities, offer a far more immediate presence, again recalling the function of the saints in Catholicism.
Posted by Anastasia F-B at 17:13