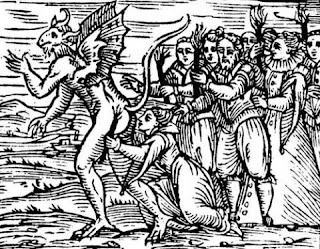 Now here is something about a form of satanic worship you may never have heard of, unless you have any knowledge of the history of witchcraft. You will know, of course, that that the Black Mass, as commonly conceived, is a perversion of the Catholic rite. Throughout the high Middle-Ages people, mostly women, accused of witchcraft were also charged taking part in a form of Devil worship known as the Sabbat. As part of this they were said to have performed a ritual greeting known in Latin as the osculum infame-literally the ‘kiss of shame.’ What this meant was that the witches lined up to greet Satan, either by kissing his backside or, more intimately, kissing his anus!

When I first came across a reference my reaction was what the hell would Satan need an anus for, when I remembered a passage in one of Chaucer’s Canterbury Tales where sinners-senior clerics mostly-are taken in at one end and ejected at the other!

Anyway, the kiss was seen not just as an act of adoration and submission but a perversion of the kiss of peace performed in the Catholic Mass. One can find loads of contemporary illustrations showing witches performing the osculum.

Hey, there are some things a girl will not do!
Posted by Anastasia F-B at 18:37