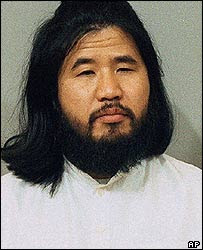 The current modish obsession with the significance of 2012 caused me to wing through past apocalypse literature; of catastrophes predicted and anticipated; of dates that came…and went! And what wonderfully bizarre stuff one comes across, what grossly bizarre people.

Let me give you the example of Chizuo Matsumoto, a failed Japanese herbalist, who in 1984 founded the Aum Association of Mountain Wizards, also known as Aum Shinriko. This individual’s sources of inspiration were eclectic and wide-ranging, embracing Hindu deities, Nostradamus, and Isaac Asimov all in one! Matsumoto recreated himself as Shoko Asahara, a reincarnation of Imhotep, the builder of pyramids.

It was while meditating on a beach that it came to Asahara that the world was going to end by the turn of the century. His organisation published books with titles like The Day of Annihilation, predicting when the disaster would come, giving various dates for the event, ranging from 1997 right through to 2001. The only way to avoid this-yes, it seemingly was avoidable for some-was to seek shelter with Aum communities…of course! Not only would his sect stockpile provisions but it would arm itself with all sorts of fantastic weapons, from lasers and particle beams to a new generation of nuclear bombs.

So far so loopy; but as the day of judgement came ever closer Asahara achieved even greater heights of self-deception. He was, so he said, Jesus Christ himself, the last messiah, but not a forgiving and gentle Christ, oh no: he was the Christ of Armageddon and the Last Judgement. Into his prophetic mish-mash he introduced The Protocols of the Elders of Zion, the notorious anti-Semitic forgery, saying that the Jews, already responsible for mass murder in Cambodia, Bosnia and Rwanda, planned to kill off the rest of the world’s population by the year 2000. And who were these Jews? Why, the most prominent included the Emperor of Japan, the Reverend Moon, President Clinton and-wait for it-Madonna. Madonna?! Our own dear Queen was identified with the Anti-Christ.

Of course it’s hilarious. It’s difficult to accept that such a character could function outside a mental institution, let alone attract some 50,000 followers world-wide. But people need faith to fill the often terrible emptiness in their lives, even when faith came in the shape of a Messiah of the Grotesque. It is funny and it’s sad, but the particular outcome in this case was also tragic.

Although he took hope from the Los Angeles earthquake of January 1994, Asahara was frustrated that so many were still ignorant of the truth of his revelations. So, he decided it was time to bring the Mountain to Muhammad by having his followers attack the Tokyo subway with sarin gas, killing eleven people and affecting thousands more. There was to be no apocalypse but a new horror had entered the world; the horror of bioterrorism.

The point is that there will always be people like Asahara, false prophets who come like ravening wolves. There will always be predications of catastrophe, always anticipations of destruction. Be strong enough not to believe. Not to be deceived. Yes, there will be disasters, in 2012 as in any other year, but they are always piecemeal, never cumulative. The end is not yet. Please, when you hear the deceivers bring Shelly to mind;

Her winter weeds outworn…
Posted by Anastasia F-B at 18:16