Life and Art: My Thoughts on H. P. Lovecraft 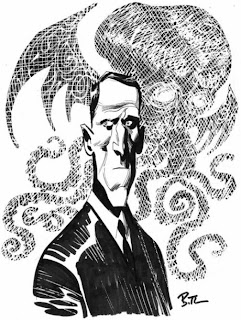 Nietzsche once wrote that philosophy is just another form of auto-biography, or words to that effect. This is also true, I suspect, of literature, though some perhaps more than others. I’m thinking specifically of the work of H. P. Lovecraft, which reveals, intentionally or not, so much about him.

Do you know anything of his life, that strange, horribly claustrophobic existence he led with his aunts and his mother, above all, his mother, in Providence, Rhode Island, living through ever downward spirals of gentile poverty and psychological tension to outright breakdown? I suspect that, in the end, the death of his mother in 1921 came as something of a relief to him, if my reading of his 1933 story, A Thing on the Doorstep, is correct. Edward Derby, the protagonist, a weak-willed character, very much in the shape of Lovecraft himself, professes shock-as the author did himself-at the death of his mother-but afterwards this initial emotional purge “…he seemed to feel a sort of grotesque exhilaration, as if of a partial escape from some unseen bondage.” Later he would write to one of his friends that “My health improved vastly and rapidly, though without any ascertainable cause, about 1920-21.” He is giving away much more than he suspects.

What do I think of Lovecraft as a writer? This is a difficult question for me, conjuring up some quite mixed emotions. He is not my kind of writer; his prose is far too flowery, bombastic and overblown for my taste. For me he is to the craft of words what Antonio Gaudi is to architecture; grotesque, over-decorated and over-ornate. Consider this passage from The Call of Cathulu, generally reckoned to be one of his best stories;

The Thing cannot be described-there is no language for such abysms of shrieking and immortal lunacy, such eldritch contradictions of all matter, force and cosmic order. A mountain walked or stumbled. God! What wonder that across the earth a great architect went mad, and poor Wilcox raved with fever at that telepathic instant? The Thing of the idols, the green sticky spawn of the stars, had wakened to claim his own…After vigilations of years great Cathulu was lose again, and ravening for delight.

I simply can’t read that without laughing!

In essence Lovecraft’s prose is like an overstuffed Victorian drawing room; a place where longs for a breath of crisp air. I contrast him with Maupassant, whose style is taught, precise and stark, a real economy of words that makes the overall effect of his horror story, The Horla, that much the greater.

Yet, for all that, there is a quality to Lovecraft uniquely his own. His ideas on science and life in general were old-fashioned, even for his own time, but there are still deep wells, perhaps even new modes of understanding. Above all, his pseudomythology, expressed in the so-called ‘Cathulu Mythos’, shows a universe where people are not at the centre, and where the gods, such as they are, care nothing for human existence, which is a mere incident in the great cycles of creation…and of destruction.
Posted by Anastasia F-B at 14:59