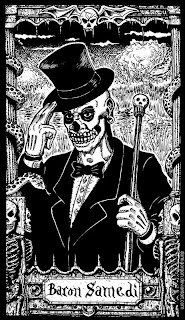 Baron Samedi, also known as Baron La Croix, the Loa or spirit of the dead in Haitian voodoo. A laughing, dancing, cane-wielding and foul-mouthed skeleton, he is most often depicted wearing a top hat and a cloak. The Baron also has other attributes, being the Loa of sex and resurrection. I find it of particular interest that the Haitians have linked sex, death and resurrection in a trinity.

So, there Samedi stands at a crossroads, where the souls of the dead pass on their way to Guinee, the final resting place, perhaps recalling Guinea in West Africa, from where many of the original slaves who created the voodoo tradition came, and where they hoped to return. Standing a little like Osiris in Egyptian mythology, Samedi is the judge of the dead; it is only with his permission, and guidance, that they can pass on to Guinee.

He is by far the most powerful of the voodoo spirits, at one and the same time a benevolent and dangerous force, who’s magic can offer protection or destruction, depending on his mood. He is responsible for both the procreation of the living-he is sometimes symbolised by a phallus-and the putrefaction of the dead. As a last resort he is invoked to help those driven to the point of death by malign magic. They will not die if the Baron refuses to ‘dig their grave.’

Given over to exchanging bawdy jokes with other spirits, including Maman Brigitte, his wife, the Baron also enjoys smoking cigars and drinking rum, which are almost invariably included among the offerings to the spirit made by his devotees. It is as well to keep on the good side of the dark Baron; for if one does not he may decide to dig one’s grave too early And if he is in a really foul mood, well you probably know as much about zombies as I do!
Posted by Anastasia F-B at 17:10