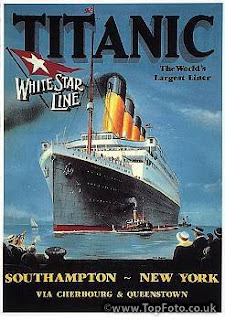 I saw an interesting drama-documentary recently on the Titanic, this April marking the ninety-seventy anniversary of its sinking. It would seem that, amongst other things, some of the rivets were faulty, made from poor quality iron, the heads of which sheered off under the strain of impact. The programme also touched on the pathology, so to speak, of the iceberg in question, which seemingly had been at sea for up to two years prior to the fatal impact.

But I really wanted to focus on some of the mythology surrounding the disaster. I suppose it's to be expected that lots of people were said to have premonitions after the event, or subsequent significance was read into particular things. In 1898 Morgan Robertson, an American writer and psychic, published a novel entitled Futility, in which a gigantic liner called the Titan collides with an iceberg and sinks mid-Atlantic.

One of the passengers on the Titanic, William Thomas Stead, a prominent English journalist, drowned in the sinking, was alleged to have secretly carried a mummy of an Egyptian priestess of Amon-Ra, on board, replete with curse on all. The mummy, so the story goes, appeared on deck at the moment the iceberg struck. In fact it never left the British Museum! But Stead himself had previously a short story in 1892, entitled From the Old World to the New, in which a liner picks up the survivors from another ship sunk by an iceberg. Another coincidence, of course, but the captain of his liner was called E. J. Smith, the same name as the captain of the Titanic.

After the event premonition tales were manifold, stories of people intending to sail but deciding against on the basis of some foreboding. Among the best of these is that of Colin McDonald, the second engineer, who refused to sign on for the voyage because he-so it was claimed-knew something terrible was going to happen. A number of prospective passengers refused to sail for the same reason. One suspects that mundane reasons for not going required a retrospective justification; for, as always, the owl of Minerva only ever flies at dusk! Oh, and the band did not play ‘Nearer, My God, to Thee’ at the last but a jaunty ragtime dance. Now, if I were to face death that is exactly what I would want to hear. :-))
Posted by Anastasia F-B at 19:10