Lighthouses: a Mystery and a Tragedy 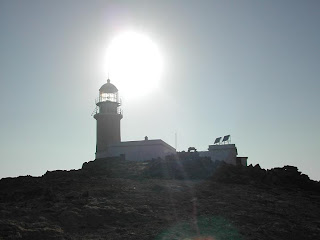 I love serendipity, the process whereby one discovers something by chance while looking for something else. I also enjoy mundane incidents leading to darker things, to mystery and to tragedy.

Consider lighthouses, rather boring and functional now but once a fertile source for the Gothic imagination. Anyway, I came across a reference to the complete disappearance of three lighthouse keepers from the remote Flannan Islands off the west coast of Scotland over a hundred years ago. In December 1900 the crew of the Hesperus, a lighthouse supply ship, found the place totally deserted. The subsequent investigation concluded that the keepers must have been swept from the cliffs in a storm. The bodies, though, were never discovered.

There were, however, some intriguing and unexplained facts. The iron railings on the west platform were badly twisted, leading to some speculation that some ‘unearthly’ force was involved. The coat of one of the keepers, moreover, was found inside the lighthouse.

Human imagination, hating a void, has filled the gaps in the story, according to the fashion of the times: that they had been taken by the Devil; that one of the keepers murdered the other then killed himself; that all three had been abducted by enemy agents. Local legend also makes much of the Phantom of the Seven Hunters, the name for the island group in the Middle Ages. More recently-and predictably-the disappearance has been put down to alien abduction!

Lighthouses did not always have three keepers in the British Isles, oh no. Until the early nineteenth century two men were considered all that was necessary….until a gruesome incident at Smalls Lighthouse to the west of Saint David’s Peninsula in south Wales.

The two keepers, Thomas Howell and Thomas Griffiths, were known to be quarrelsome, so when the latter died in a freak accident Howell, fearing that he might be accused of murder, decided to keep the body, lashed to the outside railing after decomposition set in. The makeshift coffin was destroyed by the wind, leaving the body fully exposed. The arm fell in such a way that, moved by the wind, it gave the impression to passing vessels that the dead man was beckoning. When relieved the surviving keeper was unrecognisable, having gone completely mad.
Posted by Anastasia F-B at 18:11