Hitler-the Making of an Anti-Semite 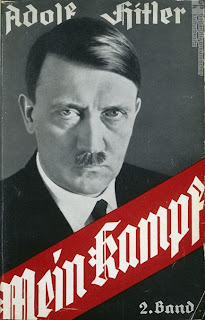 Here is a piece I wrote earlier, which I am now publishing here. Well, it is the one hundred and twentieth anniversary of his birth after all; I had to mark the occasion in some way!

The precise origins of Adolf Hitler's Anti-Semitism is a fascinating and complex question to which it is probably impossible to provide a defining answer, because it owes as much to psychology and personal circumstances as to recorded history; to factors now unknown and forever unknowable. There are great gaps in our knowledge here into which all sorts of pseudo-scholarly nonsense has been poured, none more so than the truly ridiculous Wittgenstein thesis. Pathological hatred, of the kind demonstrated by Hitler, cannot be traced to alleged schoolboy rivalry.

However, what I can do is to build a picture based on such historical information we do have. The crucial text here is, of course Mein Kampf, arguably one of the most honest books ever written by a politician, one which reveals, if properly read, far more, perhaps, that the author ever cared to allow. And, contrary to what you may have heard, the book is quite readable, if clumsy and ill-organised.

Now, to begin with, the first definite proof of Hitler use of anti-Semitism as a political weapon comes in 1919, just after the War when he joined the German Worker's Party. By the time he came to write Mein Kampf several years later he systematized a personal ideology that had become one of the great motive forces of a refashioned NSDAP. What is taking shape here is a combination of political opportunism, the realisation that there was political capital to be made out of hatred of the Jews in post-War Germany, and aspects of Hitler's personal experience which came, as he confesses, from his time in Vienna. There is no evidence at all of any anti-Jewish feeling on his part prior to this time, despite what August Kubizek says in his unreliable memoir.

For Hitler, the time he spent in Vienna prior to the War was by far the worst period of his life. He was young, an orphan, with no qualifications whatsoever; nothing to make him 'saleable', beyond a limited artistic talent, in the great polyglot metropolis, so different from the provincial Linz of his boyhood. It was in Vienna that he sunk lower and lower down the social ladder, descending into what Karl Marx termed the 'lumpenproletariat', those clinging on to the outer margins of society. Indeed, if it had not been for the war it is possible that Hitler would have died in some doss house in Vienna or Munich, just another among the legions of the lost.

This was particularly bad when one remembers that he came from a comfortable middle-class background, which made his social descent all the more bitter. He never, at any time, lost his petty-bourgeoisie attitudes, even when sleeping in common lodging houses, attitudes that demanded he look outside of himself for the author of his misfortunes. And, of course, in the end, he alighted on the Jewish community for all that was wrong with his life, the most convenient and most obvious scapegoat of all, knitting together so many different strands in his psychological and political outlook.

It was in Vienna that Hitler became the 'outsider' in his own world, surrounded by so many things he feared, from Marxism to prostitution. Vienna, as Mein Kampf, makes clear was Hitler's real university, where he learned his politics and discovered his capacity for hate. The city had a quite poisonous atmosphere at the time of Hitler’s sojourn, where the large Jewish community was an object of hate for the right-wing press; where there was already a vibrant anti-Semitic political force at work, represented by the likes of Karl Luger and Georg Ritter von Schönerer; where 'solutions' were being offered to the Jewish question by the likes of the eccentric and bizarre Lanz von Liebenfels; where some even advocated that a watch should be kept on the Jewish community around Easter, to prevent ritual child murder. It is difficult to believe that such notions could make their way into a European capital in the twentieth century, but, yes, it is perfectly true.

This was a time when Hitler was able to read in the Deutsches Volksblatt, his favourite newspaper, that the Jews were the agents of corruption, linked with all sorts of sexual scandals and perversions. Vienna was also a city with a powerful Marxist Social Democratic Party, with many prominent Jewish members. For the young Hitler, déclassé and socially vulnerable, the Marxists came to represent the most dangerous force of all; dangerous to his own sense of status and dangerous to his 'nation', as he came to understand it. And behind the Marxists came the Jews; always the Jews.

For Hitler, hatred of the Jews came to be, as Ian Kershaw points out, a rationalisation of his own personal circumstances in Vienna, rather than a thought-out 'world view'. He was just a bitter and resentful man, who, at the age of twenty-five, was going nowhere but down; resentful of those whom he blamed for his failure and rejection; a Frankenstein monster in the making. But what give these inner demons a unique drive and purpose was the circumstances of Germany in the immediate aftermath of the war, an atmosphere even more poisonous that that of Vienna. Hitler found that there was ground to be made in a strong anti-Semitic message; that in a world upside down he could at last make a personal impact. He had the talent to deliver that message, and a mind-set that would ensure that hatred of the Jews was not political opportunism but the defining essence of his movement; the defining essence of Adolf Hitler himself
Posted by Anastasia F-B at 09:36