Beards; a Cycle of Fashion 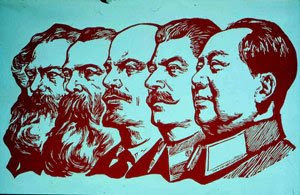 In writing recently about the Emperor Julian, the so-called Apostate, I called to mind Misophogon, or Beard Hater, his satirical essay written after his adverse experience of living among the Christian communities of Antioch. Julian’s beard, grown in the style of a Classical philosopher, was mocked by those hostile to both the old fashions and the old practices.

Amway, the beard, like most things, has a history. Perhaps it might be better said that it moves in cycles, one period bearded, the next period not. Sometimes fashions can change with remarkable rapidity. Communist parades used to be accompanied with the various figures from their pantheon, usually paraded in some form of apostolic succession, beginning with Karl Marx. Salvador Dali, both artist and comic genius, noted this, took one such depiction and labeled it The Rise of Marxism Corresponding to the Decline in Facial Hair. See for yourself; see how much humour can be taken from the least expected things. :-))
Posted by Anastasia F-B at 18:35