Highgate-the City of the Dead 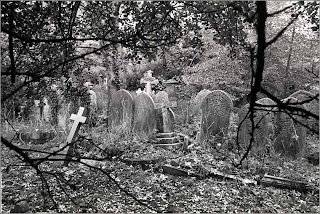 I recently touched on the subject of London’s Highgate Cemetery in a discussion elsewhere and thought I would just say a word or two more about this fascinating kingdom of the dead, a place that I think that people who do not know the city would find completely beguiling; I certainly do.

It’s not that old, though parts of it are so overgrown that it gives the appearance of something ancient. Also, a lot of the memorials are built of stone, allowing moss to gain a purchase, unlike marble. As far as I am concerned moss, trees, death and stones all make perfect partners!

Anyway, the cemetery was opened in 1839 in the Highgate district to the north of the city as part of a plan to deal with the overflow of the dead. There were other cemeteries created under the same plan but Highgate soon became the most fashionable, the final home of many wealthy people, whose Gothic memorials now provide a perfect insight into Victorian attitudes towards death. The Egyptian discoveries of the day also led to a new fashion in grave architecture, reflected in the so-called Egyptian avenue. Parts of the cemetery are now considered of such outstanding historical and architectural value that they are only opened to tour groups. If you have an image of an eerie and haunted graveyard in your mind then Highgate is probably the closest you will ever come to the reality!

Most of its denizens, no matter how important they were in their day, no matter how impressive their tombs, are now beyond memory, that final stage when death at its most complete; but there are a large numbers of the great and the good who haunt its groves…and the imagination. The most famous is Karl Marx, joined in death by Herbert Spencer, the philosopher and sociologist who provided the foundations of Social Darwinism. His rather modest memorial lies adjacent to that of Karl Marx, bombastic in every degree, a little piece of the old Communist Europe in North London. I like to imagine the kind of dialectics in death that these two have!

There is also, to mention but a few, Douglas Adams, author of The Hitchhiker’s Guide to the Galaxy, Jacob Bronowski, scientist and television presenter, who wrote The Ascent of Man; Mary Ann Evans, better known under her pen name of George Eliot, one of the greatest Victorian novelists; Michael Faraday, the physicist; Stella Gibbons, another English novelist, best remembered for Cold Comfort Farm; Radclyffe Hall, now something of a lesbian icon, author of The Well of Loneliness; Christina Rossetti, one of my favourite Victorian poets, and her brother, William Michael Rossetti, co-founder of the Pre-Raphaelite Brotherhood, all of them among the good. Among the no so good is Adam Worth, an American master criminal, once nicknamed as the ‘Napoleon of Crime’, and thought to be the inspiration for Conan Doyle’s Professor Moriarty, the arch enemy of Sherlock Holmes.

Inevitably a place like Highgate also has associations with the occult. The best known story is probably that of the Highgate Vampire. This urban myth took off in the early 1970s, when it was reported that a ‘grey figure’, variously described, was seem flitting amongst the tombs. It was eventually claimed, and reported in the press, on no certain evidence, it has to be said, that this was the ghost of a Medieval nobleman from Walachia, a practitioner of black magic, whose remains had been brought to England, Dracula-style, in the eighteenth century. It was claimed that his spirit had been raised by Satanist; and thus the Highgate Vampire was born! He’s still there for all I know.
Posted by Anastasia F-B at 22:49