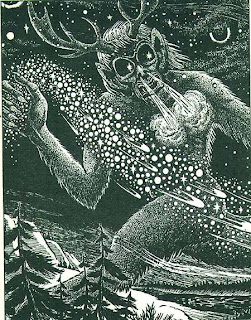 I’m discovering Algernon Blackwood for the first time, though I read one of hi stories, Running-Wolf, some years ago in the Everyman Book of Ghost Stories, a book that father once bought when he was going up to school for the first time.

It’s an astonishing discovery for me. Blackwood has a wonderful and atmospheric style, entirely captivating. I’ve loved all of the stories so far, but I must make special mention of The Willows and The Wendigo. Now, I realise that if you know Blackwood at all you must know these particular tales. But have you read them in the same way as I? I have a deep reverence for the Great God Pan and for all his works in Nature. There is, however, a dimension here of Pan that I had not fully explored; one of awesome and angry power. This is a very particular and pe4rhaps eccentric reading, though true for me.

There is another quality to Blackwood that incites my admiration; he never makes the horror palpable. It’s there but in a mysterious and oblique fashion; it is felt rather than seen. I contrast him in this regard with H. P. Lovecraft, who cannot resist revealing his horrors, which in the process of epiphany become somewhat ridiculous, laughably so in some cases.

I rather suspect that Blackwood’s atmospheric stories are so brilli8ant because he reaches down to deeper levels of consciousness; beyond reason into intuition, a place where the shadows still lurk.
Posted by Anastasia F-B at 18:21