Our Girl in Havana! 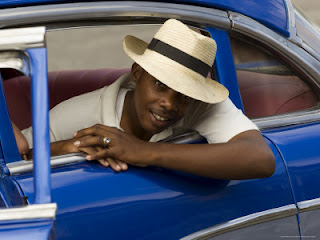 I love to travel. I’ve been going to one place or another since I was very young. My parents are quite wealthy, so we always went on exotic holidays. Latterly I’ve been going away with friends, usually twice a year, sometimes more, when money and time allow.

Last summer I was in Havana . Yes, I was. What a fascinating place it is, full of life, of music, of dance, of sex…and of danger. The American embargo-a great error of judgement-has kept the place preserved in a kind of time-loop, somewhere in the early 1960s. Everywhere there are cars, American classic cars, fashionable over fifty years ago, that somehow have been kept going. The city itself, large parts of it, are crumbling, as if just emerging from a war or a great natural disaster. The old city-Habana Vieje-is still in reasonably good condition, as are large parts of the more affluent suburbs, but the intermediate core, and areas along the Malecon, are in a fairly dire state.

I was there with some girlfriends from university. We stayed in the old city, in a hotel called Ambos Mundos, a wonderful eccentric pink palace, where Ernest Hemingway lived briefly in the 1930s. His room-511, I think-is still preserved as a museum.

As always I tried to get to know the local people; but it’s not easy. The grey-shirted police are everywhere, absolutely everywhere, and they clearly have instructions to intervene when local people, other than those in the tourist industry, engage with visitors. There also, it seems to me, on the basis of some superficial observations, to be a racial element in this process. It always seemed to be the case that if we talked to black boys, or were with black boys, the police were quick to intervene. I was sitting with a guy in Parque Central, opposite the Hotel Inglaterra, when the police appeared and took him away. Yes, with virtually no explanation. I tried to intervene, but my Spanish simply is not good enough, and they speak too fast, so I was left helpless.

But I will not be put off by things like that; I simply got more careful. We did make contacts, in bars and clubs, with some really cool people. It was because of this that I was able to go to a Santeria gathering. It was in an old building, a real warren, in terrible condition, and full, really full, of people. The ceremony itself was held in a large room, with an alter at one end, consisting of various figures, Catholic saints and the representation of West African gods. There were drummers and people were drinking rum and dancing. The whole thing was so strange, like nothing I’ve ever experienced, really energetic, really wild. One woman went into a trance, undergoing a kind of possession.

I should stress that I do not believe any of this was put on for my benefit. ! paid nothing, part from a small offering we made to the saints and gods. I had so much rum, and I was dancing so wildly myself, that I could feel that I was being absorbed, if that makes sense, into the group and into the moment; as if I was losing all sense of myself.

I did not go back to the hotel that night: I stayed and I slept with a beautiful guy called Jorge. :-))
Posted by Anastasia F-B at 19:33