We Cannot Legislate against Lunacy 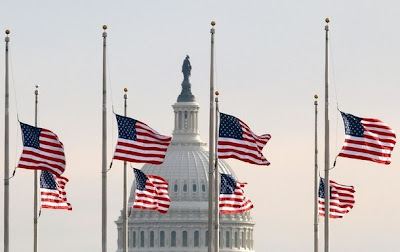 This is the most difficult article I’ve ever written.  In the face of the appalling tragedy in it’s almost impossible to find the right words.  I love words but sometimes they are so inadequate.  Here it might be said that respectful silence is the only response, silence and sorrow in silence.

But others are speaking and some are shouting, bawling almost.  I raise my voice in a perfect storm, knowing that I’m unlikely to be heard, or if heard I am likely to be misunderstood.  Just about every report I’ve read about the mass shootings last week at Sandy Hook Elementary School in the town of Newton has raised the issue of gun control, the equation being that the Second Amendment right of US citizen to bear arms equals periodic massacres.  Few seem to pause and think.  The Second Amendment has been in place for over two hundred years but rampaging madmen are a feature of the modern age.  Why, why and why again?

I’m going to push these whys but first I should declare an interest.  The thing is I enjoy shooting, which opens be to an additional accusation - that of selfishness. I have licences for both a .22 rifle and a four-ten shotgun. I enjoy target practice and I enjoy rough shooting. I really do have to stress that all of the people I have met through this sport are sensible, intelligent and well-balanced. I first learned to shoot staying with family friends near in .  I have little doubt that most Americans who are in legal possession of firearms are also sensible, intelligent and well-balanced.

I do have firearms but unlike Americans I have no constitutional right to bear arms.  It wasn’t always the case.  The 1689 English Bill of Rights – upon which the American version was later based – enshrined the right of people to bear arms for defence.  And so it remained, right into the twentieth century.  In his A Brief History of Crime Peter Hitchens points out that when in 1909 the police in the Tottenham district of London came under fire from a gang of foreign anarchists they asked the public for assistance. Not only did they borrow guns from the local citizens but they also appealed to members of the public to help shoot back.

Over the course of the last century gun control in got tighter and tighter, largely because governments started to fear the people, chiefly for political reasons.  But tight gun control did nothing to stop the Dunblane School Massacre in 1996.  Gun control has done nothing to stop more and more firearms getting in to the hands of criminals.  The truth is the tighter the gun laws have become the more prevalent gun crime has become.  It might be said that while we have disarmed honest citizens we have armed dishonest gangsters.

Looking to Europe there is , which has particularly strong firearms control.  That did not stop Anders Behring Breivik going on a rampage.  Now consider another example altogether; consider .  This is a country whose proportion of gun ownership per capita is among the highest in the world, not far behind the .  This is a country where almost every adult male is required by law to bear arms.  Yet it’s also a country with a particularly low murder rate.  Such gun crime as there is mostly involves illegally held arms.

Now I turn my eyes back over the .  So far as the clamour for gun control is concerned it would be as well to consider the words of Sammy Gravano, one-time mobster.  In a 1999 interview with Vanity Fair he said – “Gun control?  It’s the best thing you can do for crooks and gangsters.  I want you to have nothing.  If I’m a bad guy, I’m always going to have a gun.”  The simple truth is that many types of crimes, as Hitchens pointed out in his book, fall sharply in those districts where normal and law-abiding citizens are allowed to carry concealed weapons.

It might interest you to know that in approximately half of all burglaries occur while people are at home.  In this is as low as one in eight.  In those States which openly licence citizens to use deadly force against intruders burglary is virtually unknown.

What happened in was not normal; it was an obscenity, just as Dunblane was an obscenity.  Adam Lanza – I can barely bring myself to write his name - , a maladjusted twenty-year old, went on a ghastly killing spree.  Why, what was his motive?  Will we ever know with exactness?  Possibly not, but possibly it was no more than a desire for notoriety and fame, that shallow contemporary obsession, the shallow obsession of losers and mediocrities everywhere.

But there is more.  As I noted above, this kind of mass shooting followed by suicide is a feature of our age.  Lanza was not normal; Lanza, as I understand from the Washington Post, had some mental or developmental disorder.  The New York Times reports that it was Asperger’s Syndrome, a high functioning form of autism. Accordingly it seems he was on strong medications.

Here I can only agree once again with Peter Hitchens.  Writing recently on his Daily Mail blog, he says that it would make sense for the press to explore this route rather than raise a futile wail in favour of gun control.  Is it possible, one has to ask, that there is a correlation between what happened at and the increasing use of modern medications for mental illness?  We badly need answers here.  Instead we are likely to get the usual clichés.

A world away from there was another murderous rampage last week, though it has attracted far less media attention.  In central a knife-wielding man stabbed twenty-two children outside a primary (grade) school.  It was less terrible than because none were killed, though several were taken to hospital, some with severed fingers and ears.  According to police the perpetrator, since detained, is ‘mentally-ill.’  Tight control on firearms means that gun crime is virtually unknown in .  Instead knives, and sometimes explosives, are used in mass attacks.  The sad truth is we cannot legislate against lunacy.