A Tribute to Perfection 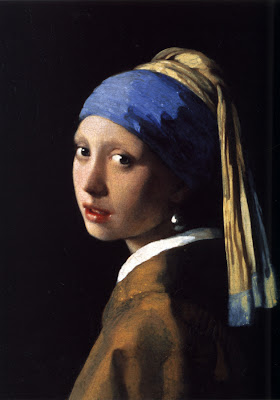 When you see a beautiful woman, what do your thoughts turn to?   This was a question posed on Blog Catalogue.  It wasn’t about the obvious; it wasn’t about sex: it was about aesthetics.

I didn’t bother answering because it was chiefly directed at men.  But my thoughts immediately did turn, as the poster put it, to the Beauty of a Woman.  For some wholly unexplained reason they turned to Girl with a Pearl Earring, both the painting by Johannes Vermeer and the 2003 movie staring Scarlett Johansson and Colin Firth.  For me the one complimented the other perfectly, a depiction of peerless beauty inside a seductive enigma.

I saw the painting several years ago in the Mauritshuis Gallery in .  I was completely beguiled by the look of the subject, the way she stares out, the way she stares inside.  Girl with a Pearl Earring is sometimes referred to as the Mona Lisa of the North, though I find her far more mysterious and captivating than the Mona Liza of the South.

These questions are unanswerable.  But into the mystery came Tracy Chevalier, who spun a story around this head.  To this story came movie director Peter Webber, who turned a painting and a novel into a cinematic masterpiece, an artistic hymn to beauty and to painting.

I haven’t read the novel, though I’m told it’s very good.  In a way I’m glad because the film, which I saw a month or so ago on BBC iPlayer, depends more on image and mood than words.  The dialogue is wonderfully understated, so much depending, like the painting itself, on look.  Scarlett Johansson might have been born to play this part, not just because she a good actress, not just because she is strikingly beautiful, but because she could very well be the Girl herself, come to life but carrying the enigma with her. 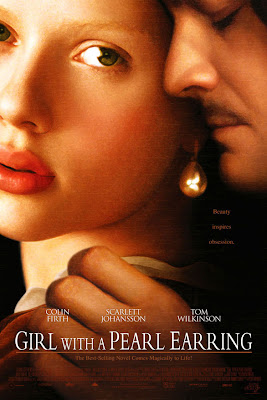 Everything about this film for me was perfection - perfection in character, perfection in setting, perfection in mood and perfection in image.  Axel Ruger, the curator of Dutch art at ’s National Gallery, quite rightly said that it takes the atmosphere and some of the pictorial conventions of the seventeenth century and translates them into cinematic language.  It is, in other words, a moving image of the still painting.

The premise of the movie, the premise of Chevalier’s book, is based on a supposition – what if Vermeer had been inspired by the beauty of a maid who came to the household to create one of his greatest masterpieces?  And thus it is.  Johansson comes as Griet, a girl from a dignified but impoverished Protestant family to serve with the Catholic Vermeers.

To begin with the artist pays her little mind, isolating himself in his studio, not just to concentrate on his work but to get away from the demands of everyday domestic life.  It’s only after Griet, who moves around bullied and mostly wordless, is given the task of cleaning the studio that she becomes an object of interest owing to her sensitivity towards light and colour.  She is not just an object of interest to the artist, helping him mix his paint, but an object of desire to Van Ruijven (Tom Wilkinson), his wealthy but boorish patron.  When he fails to possess to possess Griet physically he decides to possess her physically!