A Nocturnal upon Saint Lucy’s Day 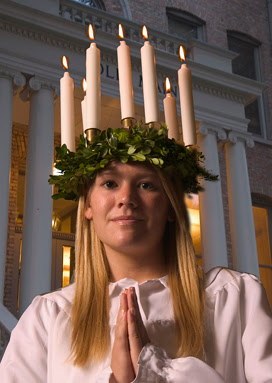 Lucilla Ochoa Peterson, Lucy for short, is a particularly close friend.  We met when we both came up to , full of enthusiasm for the same sort of things…and some of the same boys.  Lucy’s mother is from and her father is Swedish.  She grew up in and I’ve visited her there on several occasions.  This year I’ve promised, all being well, to go with her to visit her grandmother and other members of her extended family in and .

Today, 13 December, is Saint Lucy’s Day, the patron saint of light.  Lucy was Lucy when she was a girl!  The Swedes have a rather charming tradition, the celebration of an early Christian martyr with strong pagan overtones.  In schools across the country a girl is chosen to head a procession, either holding a single candle or wearing a candle crown.  Lucy was elected not just because of her name but because she is so beautiful, a lovely combination of Nordic and Hispanic looks.

She with the other Lucys, accompanied by their maids, all wearing white robes with scarlet sashes, processed around their home towns, visiting old people’s homes, churches and other public places, singing and handing out traditional seasonal confections.  I’ve tried the lussekatt – Saint Lucy’s Bun – and it’s really quite delicious.

So, dear Lucy, this is for you, my Nocturnal upon Saint Lucy’s Day. Let John Donne, your favourite poet and mine, sing the song of winter’s shortest and deepest day.  Soon we will pass the solstice; soon we will return to the sun. Splendeat Lux Vestra.  You will remember and you will understand. :-)

'TIS the year's midnight, and it is the day's,
Lucy's, who scarce seven hours herself unmasks ;
The sun is spent, and now his flasks
Send forth light squibs, no constant rays ;
The world's whole sap is sunk ;
The general balm th' hydroptic earth hath drunk,
Whither, as to the bed's-feet, life is shrunk,
Dead and interr'd ; yet all these seem to laugh,
Compared with me, who am their epitaph.

Study me then, you who shall lovers be
At the next world, that is, at the next spring ;
For I am every dead thing,
In whom Love wrought new alchemy.
For his art did express
A quintessence even from nothingness,
From dull privations, and lean emptiness ;
He ruin'd me, and I am re-begot
Of absence, darkness, death—things which are not.

All others, from all things, draw all that's good,
Life, soul, form, spirit, whence they being have ;
I, by Love's limbec, am the grave
Of all, that's nothing. Oft a flood
Have we two wept, and so
Drown'd the whole world, us two ; oft did we grow,
To be two chaoses, when we did show
Care to aught else ; and often absences
Withdrew our souls, and made us carcasses.

But I am by her death—which word wrongs her—
Of the first nothing the elixir grown ;
Were I a man, that I were one
I needs must know ; I should prefer,
If I were any beast,
Some ends, some means ; yea plants, yea stones detest,
And love ; all, all some properties invest.
If I an ordinary nothing were,
As shadow, a light, and body must be here.

But I am none ; nor will my sun renew.
You lovers, for whose sake the lesser sun
At this time to the Goat is run
To fetch new lust, and give it you,
Enjoy your summer all,
Since she enjoys her long night's festival.
Let me prepare towards her, and let me call
This hour her vigil, and her eve, since this
Both the year's and the day's deep midnight is.