The not so strange death of Liberal England 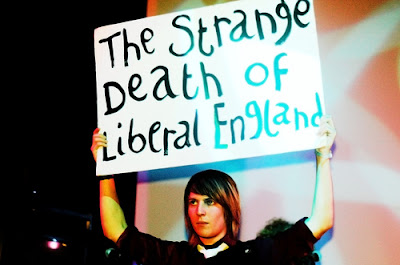 I’ve been looking at developments oop north, Rotherham in , to be precise.  Politically it’s a socialist redoubt, held for years by the Labour Party.  It’s the kind of territory where if a red rosette was pinned on a chimp it would be returned to Parliament.

Come to think of it Denis MacShane, the previous incumbent, is a bit of a chimp; a chump anyway.  I shall be even more unparliamentarily in saying that he is little better than a crook, forced to resign the seat over expense claims that were ‘plainly intended to deceive.’  That’s the parliamentary phrase!

I’ll come to the latter in a bit but first I need to do a spot of crowing.  Caw, caw, I call; my, how I delight in the decline and decline of the Limp Dumbs.  Can it be, can it possibly be that they will turn in ever decreasing circles to the point of complete extinction, the Incredible Shrinking Party?  Let it be, she sings; oh, let it be.

The Northern Folk, you see, had a by-election last week in the wake of MacShane’s disgrace and forced resignation.  They got rid of Labour and – guess what? – they got Labour.  The vote is dead; long live the vote!  They voted for another chimp, one Sarah Champion, memorable for being completely unmemorable.

But the election itself was memorable for other reasons, not least of which was the disastrous showing of the Clegg gang, who slumped to eighth place in the poll, behind the British National Party, behind the English Democrats and behind George Galloway’s Respect.

Incidentally, the Respect candidate was a certain Yvonne Ridley, a journalist of a sort once held captive by the Taliban in .  She enjoyed the experience so much that she subsequently converted to Islam.  She is also something of an obsessive, vowing to hunt down Zionists wherever they are to be found, yea, even so far as the ranks of Respect, which must be a bit like hunting for a vegetarian among cannibals. Her anti-Zionist credentials are doubtless why she was chosen to stand in , that well-known Zionist stronghold.

Sorry for the diversion.  Let me get back to the Liberal Democrats, now in deep mourning.  I dare say they are falling back on the usual guff about not getting their message across.  I rather think the Rotherhamites got a message across to them.  Polling pundits are saying that no major political party has ever performed so poorly in a by-election.  Eighth place and a mere two per cent of the vote; that is the message they have to bear!

The thing about the Liberal Democrats is that they had no clear idea of what they are and what they represent.  Oh, yes, they were desperate for power, but power has its penalties, most of all on a movement that was really just a collective gripe.  Out of power for generations, the Liberals and subsequently the Liberal Democrats turned into a protest party, embracing every politically fashionable cause, from windmills to gay marriage.  It was a movement for socialists who could not quite define themselves as socialists, progressives who progressed in whatever direction the wind blew.  In the end power was their Inchcape Rock, upon which their fragile vessel shattered.

I suppose the really interesting thing about is that the onward march of the United Kingdom Independence Party (UKIP) has not been halted.  With over twenty-one percent of the vote, they came second behind Labour, well ahead of the Tories, to whom they must now be considered as a serious rival on the right, following the result earlier in the month

’s Ministry of Love, sorry, make that Social Services Department, must be seriously concerned by this trend.  I expect they are already scouring their foster register just in case any children have been placed in the care of UKIP supporters.  After all, one’s political views have a clear bearing on one’s suitability as a parent.  The Labour-controlled Rotherham Borough Council certainly believes so, having previously removed three children, including a baby, in the care of a UKIP-supporting family.

The great crime of these people was their opposition to multiculturalism, which in the eyes of ’s KGB-trained social workers makes them ‘racist.’  The older children, who called the people in question mum and dad, are said to be traumatised by the whole experience. Apparently in true KGB-style the social service apparatchiks descended on the family after an anonymous tip off.  Here come a candle to light you to bed; here comes a chopper to chop off your head.  Yes, we become more like Airstrip One with every passing day.

So it’s pretty dangerous to be a supporter of UKIP in , especially if one wants to be a parent.  It’s reasonably safe, though, to be a member of a predominantly Asian gang trafficking underage white girls for sex.  Big Sister in the shape of Joyce Thacker, ’s social services director, goes around the place defending her dawn raid, all the time ignoring that her department was one of those singled out earlier in the year for its negligence over the pimping issue.  If only the perpetrators had been members of UKIP.  That surely would have made all the difference.