The Hand of History 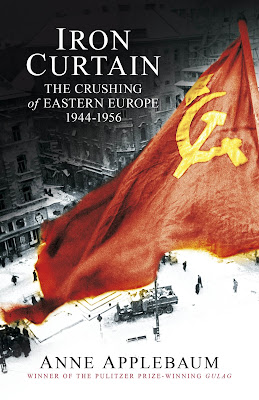 There are not many jokes in communism. Actually that’s not quite true. A case could be made that communism itself was a massive joke, except those living under it dared not laugh, or laugh only at their personal peril. All humour in what used to be called the Eastern Bloc was inevitably of a subversive nature. For as George Orwell wrote, a thing is funny when it upsets the established order; that every joke is a tiny revolution. The revolutionaries did not want revolution; they wanted total conformity.

Have you ever been in a situation, or a place, say a church or a library, where something struck you as funny? It may not be all that funny on later reflection but just try to contain a laugh when it wants to explode!

I’ve been reading Anne Applebaum’s masterly Iron Curtain: the Crushing of Eastern Europe, 1944- follow up to her equally masterly Gulag: a History of the Soviet Camps. There are not many laughs in that, you may think. But you are wrong. I’m not at all sure I could have survived the dull curtain of monotony that descended on after 1945 for one simple reason – I have an acute sense of humour.

You see, I would have been overcome with explosive fits of laughter over the shear earnest pettiness of it all. Imagine going in to a bookshop and seeing children’s titles like Six-Year-Old Bronek and the Six Year Plan. You leave quickly, only to have your senses assaulted by a propaganda hoarding. There it is, just across the street, boldly announcing “Every artificially inseminated pig is a blow to capitalist imperialism!” Your lips are tightly closed; the laughter is escaping like steam under pressure. You don’t want to be seen so you turn away to look at the latest civic art, only to be confronted by a painting entitled “The technology and organisation of cattle slaughter.” Was the Berlin Wall really brought down, I wonder, by a great outburst of laughter? Sorry, I should write the Anti-Fascist Protection Wall, to give its official title.

Yes, there is humour in the story but the bigger picture is altogether bleak. In picturing the history of communism in I see a façade, eaten hollow from within by termites. In the end the whole thing simply collapsed under its inherent contradictions, to borrow a piece of cherished Marxist terminology.

Let’s be absolutely clear about one thing: for people in places like , particularly , the Second World War did not end in 1945. The immediate joy of ‘liberation’ simply gave way to an understanding that a new occupation had taken hold, one that was to last for decades.

The expression ‘Iron Curtain’ did not originate with Winston Churchill but it was he who was to give it greatest resonance in speech delivered in Fulton, Missouri in March, 1946;

From Stettin in the Baltic to Trieste in the Adriatic an iron curtain has descended across the Continent. Behind that line lie all the capitals of the ancient states of Central and . Warsaw, Berlin, Prague, Vienna, Budapest, Belgrade, Bucharest and Sofia, all these famous cities and the populations around them lie in what I must call the Soviet sphere, and all are subject in one form or another, not only to Soviet influence but to a very high and, in some cases, increasing measure of control from Moscow.

Applebaum sets out her stall quickly. She refuses to entertain the revisionist view that the imposition of communism throughout Central and after 1945 was a countermove to American policy at the start of what was to become the Cold War. No, the importation of a Soviet-style system was a deliberate ideological move, all part of the greater revolutionary good. As she quite rightly says, there was a template already in place for this in the Soviet occupation of , and in 1940, states that had been consigned to Stalin under the terms of the Nazi-Soviet Pact.

So far as Stalin was concerned there were also foreign policy advantages. The new communist satrapies acted as a buffer zone in a period of growing East West tension. More specifically, an independent would clearly have been a major political embarrassment to the Soviets, doubtless demanding the return of those territories in the east of the country seized by Stalin in 1939 as part of his satanic bargain with Hitler. For it was a bleak choice between extinction and communism.

As always the road to hell begins with noble intentions. Alongside the cynical little Stalins, who had spent years licking the boots of their Master in , there were genuine idealists, people who believed in the lie. They came as self-perceived liberators, ready to free the working classes from capitalist exploitation. They expected to be welcomed in their establishment of a brave new world. Unfortunately for them it had real people in it.

The truth came quickly; the truth came in . In 1946 the people decisively rejected a communist-backed referendum. Perplexed, the government rejected the people, concluding that they had acted in “some kind of incomprehensible spirit of resistance and complete ignorance.”

Here I immediately fast forwarded to the events of June, , the first serious uprising against imposed communist rule. Bertolt Brecht, the playwright, had hitherto served as the German Democratic Republic’s tame intellectual and court poet. But even he had enough, offering comment on the worker state’s suppression of the workers in his poem The Solution;

After the uprising of the 17th of June
The Secretary of the Writers Union
Had leaflets distributed in the Stalinallee
Stating that the people
Had forfeited the confidence of the government
And could win it back only
By redoubled efforts. Would it not be easier
In that case for the government
To dissolve the people
And elect another?

That would seem to serve as the very definition of the so-called People’s Democracies. In the place of real people came a hollow cardboard illusion.

Applebaum is splendid in her treatment of the high politics, in her description of the appalling stooges who reproduced the bleak apparatus of Stalinism in their respective spheres of influence: personality cults, purges, camps, bogus trials, the whole depressing paraphernalia. She also offers a description of the corrosive effects of communism on everyday life. Any kind of personal or free expression, even in the most minor forms of liberty, was excised. Popular consciousness was filled with the state and nothing but the state. One small example serves here. The scout movement was banned as were all other private societies. In a seventeen-year-old girl met with friends from a former troop. All were arrested and given jail sentences of two to five years.

Iron Curtain is a splendid piece of work, witty, perceptive, thoroughly researched and superbly written. I was impressed enough to consider it the most important book I’ve read this year, one that will make a lasting contribution to our understanding of this period in history, a tragedy on which the final curtain has thankfully fallen. My main criticism concerns the title. It’s not a comprehensive history of Eastern Europe between 1944 and 1956, as the title misleadingly suggests, but principally a history of three countries behind the Curtain – , and . There is next to nothing on places like , where the whole communist experiment eventually descended to the most degenerate form.

Don’t let that bother you. The history we are given is first class, a journey into a heart of darkness. Iron Curtain is a book that is scholarly and accessible, free of all condescension while losing nothing in the telling. It’s a commendable achievement. I felt both exhilarated at deflated at the end, especially after reading about the brutal suppression of the 1956 anti-communist rising in , which proved to all who were not blind that the liberation of 1945 was nothing but a lie. I was exhilarated by the narrative and deflated by the fate of some of our fellow Europeans, to whom history had dealt such a poor hand.
Posted by Anastasia F-B at 15:40