Publish and be Damned 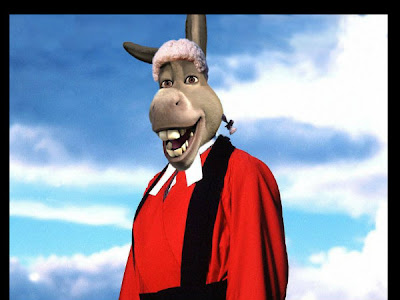 The law is an ass, an idiot, so said Charles Dickens’ Mister Bumble the Beadle in Oliver Twist.  I think we can maybe refine that just a little: it’s not the law that is an ass and an idiot but Lord Justice Leveson, who last week produced his report recommending, as anticipated, statutory regulation of the press.

His conclusion has been welcomed by other asses, not least of whom is Nick Clegg, the Limp Dumb Deputy Prime Minister, a man who could play Bottom the Weaver in A Midsummer Night’s Dream with no need for the ears.

David Cameron, now twisting on the horns of yet another dilemma, only has himself to blame for his discomfort.  There was no need, as I have said, for this expensive farce in the first place. Breaches of the law by journalists in News International should have been dealt with as breaches of the law, nothing more.  Instead we have this stupid lawyer and his equally stupid acolytes mounting a challenge to press freedom, a freedom upon which all others might be said to hang.

What irony there is here.  Our democracy is dying anyway, hurried along to extinction by the European politburo in .  Now if Leveson has his way we can forget about Milton and Wilkes and Orwell; we can forget about all those who defended a free press as an essential adjutant to free speech.  State regulation is the beginning of the end.

It’s gratifying to see that not all in the present government are as terminally stupid as the insufferable Corporal Clegg.  William Hague, the Foreign Secretary, warned Cameron that statutory press regulation would be warmly welcomed by Vladimir Putin and other petty tyrants around the globe.  According to one insider, Hague said that “… demonstrating that we have a free press is part of our ability to say that we believe in democracy…if we announced statutory regulation this would be used by the Russians to justify all sorts of behaviour.  It is a fundamental part of British foreign policy to have a free press.”

It’s a point of view echoed by Jethro Goko of the Daily News, ’s biggest independent newspaper.  He said that the rest of the world looked to as a model of press freedom and that the phone hacking scandal should not be used as an excuse for government interference.  If Leveson has his way it will be “manna from heaven” for the likes of Robert Mugabe and his kind.  Goko should know.  His own paper was shut down for seven years and only publishes now under state licence.

Here the Spectator, my favourite political weekly, has openly announced in the latest issue that it will not cooperate with any regulatory structure mandated by the state.  Fraser Nelson, the editor, writes that the publication will not attend meetings, pay fines or heed menaces.

“To do so would be to betray everything The Spectator has stood for since 1828.”  So far as he is concerned Leveson is a no-brainer.  “…our archives [show] how we have been implacably opposed to the principle of state regulation of the press – not because it protects the press, but because it protects the public.” He added that the magazine has a long history of standing up to politicians who want to restrict freedom of speech.

When I think of Leveson I think of one of those antediluvian fossils, the old judges who sit on the bench regularly having to seek enlightenment as lawyers present their cases because there is some aspect of modern life that they do not understand, from Wi-Fi to iPhones.  Leveson does not understand the internet.  A mere twelve of his almost two thousand page tome is devoted to its place in modern life.

His is a scheme that is effectively twenty years or so out of date, completely ignoring the fact that more and more people get their news from the net, not from newspapers.  The Sun pointed out the absurdity here, saying that it and other papers could be stopped from publishing stories and pictures already seen by millions online.

A gagged press is a dead press.  With circulation already in sharp decline I’m guessing that in twenty years or so we will no longer have published newspapers, the so-called ‘qualities’ like the Guardian being the first dinosaurs into Jurassic extinction.  Let its ridiculous editor reflect on that as defends Leveson’s attempt to “ensure decent standards.”

Publish and be damned.  Be damned to state control of the press; be damned to Lord Leveson
Posted by Anastasia F-B at 16:24