The Sixteenth Pluviôse of David Cameron

In The Eighteenth Brumaire of Louis Napoleon Karl Marx said that everything in history occurs twice, the first time as tragedy and the second time as farce.  The Eighteenth Brumaire is a reference to the date on the French revolutionary calendar when Napoleon Bonaparte – the tragic hero – seized power in 1799 in a coup d'état.  Louis Napoleon is the nephew, a grotesque mediocrity, who had his own Eighteenth Brumaire in 1851, subsequently creating the comic opera Second Empire.
It’s not often that I agree with anything that Karl Marx said or wrote, but here I think he has a point – tragic greatness is succeeded inevitability by laughable mediocrity.  In the history of British Toryism, for instance, we have Sir Robert Peel, the man who shaped the modern Conservative Party and then almost destroyed it by later supporting the repeal of the Corn Laws, thereby undermining the economic power of the landed gentry.  In this instance Peel put Country above Party.  It was for him an issue of necessity and of principle, an issue that destroyed him personally, an issue that divided the Party irrevocably.
Peel is the tragic greatness.  Now at last we have the farce; we have David Cameron, the present leader of the Conservative Party and Prime Minister under a Coalition government.  He, too, has fought on an issue of principle; he, too, has laid down the lines of battle; he, too, has presided over a new split in the Party.  And what is his great issue of principle; what is his Corn Law moment?  Was it the level of public debt, was it unemployment, was it the danger of another wave of mass migration from Eastern Europe; was it over our ancient constitutional liberties?  No, his Corn Law moment is...same sex marriage.  This is Cameron’s gay moment in history. 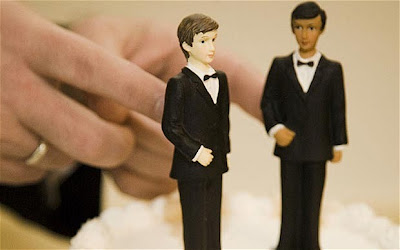 Parliament voted on this rainbow flagship policy on Tuesday 5 February (Sixteen Pluviôse!), with a healthy majority in favour.  Unfortunately for Cameron, who did not even have the courage to attend the debate, 134 Tory MPs voted against with 35 abstentions.  Even some members of the cabinet and the government’s own top lawyer voted against.  Only 126 voted in favour.  The measure was carried with the overwhelming support of the Labour and Liberal Democrat parties.  Is this the beginning of the end for the Cameroons, I have to ask?  Toryism, in any meaningful sense, is already dead.
I’ve been re-reading George Orwell.  My, what fun he would have had with modern politics, the lies, the absurdity, the dissimulation and the hypocrisy.  I look at David Cameron, I look at Nick Clegg, the leader of the Liberal Democrats and Deputy Prime Minister, and I look at Ed Miliband, the leader of the Labour opposition, and what do I see?  I’m not sure.  A terrible sameness, that much is clear, as if they had all been cast from a single mould.  Wait; I know exactly what I’m reminded of, the concluding words of Animal Farm – “The creatures outside looked from pig to man, and from man to pig; but already it was impossible to say which was which.”  I cannot say which is which.
Social conservatism died last week.  No, it did not; it’s alive in the country at large, but in Parliament it lacks representatives among the leadership of the three main parties, a point made by Charles Moore writing in the latest issue of the Spectator.  It’s a momentous disenfranchisement, as he puts it.
He makes some other points, things I’m wholly in agreement with.  Personally I could not care less if a fat nancy boys (oops; sorry; it’s the Orwell influence) like Elton John go through some parody of Christian marriage or not.  I’m wholly indifferent, just as I would be if dogs decided on nuptials; it’s no business of mine.  Besides, I suspect that there is a comedy goldmine here.  Oh, the joys to come, like gay divorce and gay custody battles. 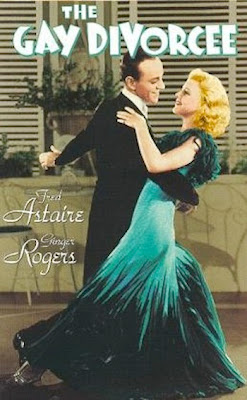 But, surely, the onward march of equality is not to be halted?  By what right, Moore asks, do we oppose polygamy?  After all, Muslims believe that a man has a right to take up to four wives.  Why does our present law disrespect their traditions?  Pure prejudice, clearly.  And there is more.  For, you see, Moore has logic and history and progress on his side;
The same-sexers express old-fashioned disgust at their opponents’ suggestion that their arguments could justify incest, but I do not see why. The gay marriage case is that marriage is good if people love one another very much. Why, by their argument, should this not apply to siblings who feel that way about each other or parents and their (adult) children? Are they saying that certain sex acts are disgusting? If so, on what grounds? Besides, gay incestuous marriages could not possibly pose any genetic risk, since they can produce no offspring. What taboo from the dark ages is holding the reformers back?
Good questions, Charles, you soft old leftie; what is holding the pig politicians back?  Surely not the fear of an adverse reaction by the public, who, as we all know, are fully behind the progressive agenda.  Oh, don’t take my word for it; the Economist has spoken here, and we all know how perspicacious and prescient the Economist is.  The opponents of gay marriage, you see, are a lot of old fogies (Zimmer-framing the issue, 9 February).  The grey vote may be the stronghold of bigots but look to the young, fully behind progress and equality;
To win in 2015 the Tories must target younger voters, who are disproportionately present in marginal seats.  Whisper it softly, but in setting himself against many of his MPs, Mr. Cameron – the party’s greatest electoral asset – may have improved their prospects of re-election.
An interesting viewpoint, don’t you agree?  Hey, but why whisper it softly?  David Cameron, the party’s great electoral asset, Mr. Bullingdon Club himself, will ride back into government, possibly with a decent majority, on the back of a lot of metropolitan fads.  Yes. England has turned into Islington! 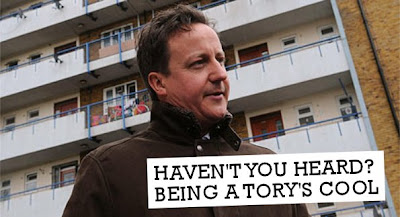 I’m quite prepared to admit that most people in my age group will give the soft soap response when asked for their opinion on equality.  It’s only fair, innit?  But what is clearly beyond the wit of the arses on the Economist is that when people vote, if they vote at all, and when voting is not simply a reflex, they do so because there are matters of deep personal concern to them.  Just imagine all the proles approaching the ballot box in 2015, in a fey and gay mood.  It’s just so, so difficult to control my natural cynicism.  How many divisions does the Pope have?, Stalin asked in dismissive scorn.  How many votes are there in gay marriage?  Oh, don’t look to me for an answer.  Ask David Cameron.
George Orwell (him again!) wrote of Jonathan Swift, the great eighteenth century satirist, that he was “one of those people who are driven to a perverse Toryism by the follies of the progressive party of the moment.”  I was driven to perverse Toryism at an early age, the influence of my much loved grandfather, a county gentleman of the old caste.  But since Toryism in its Cameron mutation has become part of the progressive folly of the moment I can’t be sure what the future holds for me politically.
I welcomed the Coalition government in 2010, not the best of all possible worlds, but the best we could get; at least the ministry was headed by a Conservative.  I was wrong; it’s headed by a worthless idiot, a mediocrity of the first degree, one whose personal politics are based on nothing but condescension, faddishness and guilt.  He even makes Louis Napoleon look good, which really is quite an achievement.
So far as his wretched government is concerned I call to mind the words of Oliver Cromwell in dismissing the Long Parliament in 1653;
Is there a single virtue now remaining amongst you? Is there one vice you do not possess? Ye have no more religion than my horse; gold is your God; which of you have not barter'd your conscience for bribes? Is there a man amongst you that has the least care for the good of the Commonwealth? Ye sordid prostitutes have you not defil'd this sacred place, and turn'd the Lord's temple into a den of thieves, by your immoral principles and wicked practices? Ye are grown intolerably odious to the whole nation; you were deputed here by the people to get grievances redress'd, are yourselves gone! So! Take away that shining bauble there, and lock up the doors.
In the name of God, go!
You see, now I’m in agreement with Karl Marx and Oliver Cromwell.  The world has been turned upside down!  Alas, this is what Cameron has driven me to. 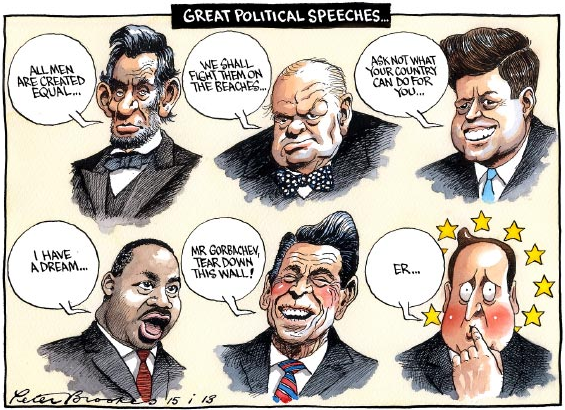