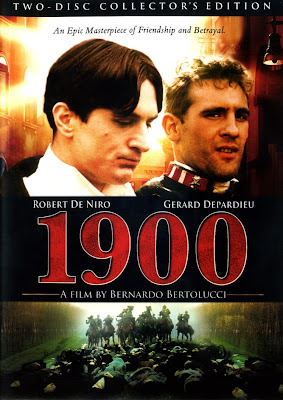 Have you heard of a movie called 1900?  If not, it’s a 1976 Italian extravaganza, directed by Bernardo Bertolucci.  I say it’s Italian but the leading parts are mostly taken by an international cast, chiefly American.  Apart from France's Gerald Depardieu – amazingly young and thin looking – there is Robert de Niro – also amazingly young looking -, Donald Sutherland and Burt Lancaster.
Was this, I wonder, a time when their careers were in the doldrums?  Perhaps they still had to make a name for themselves?  No, no, that can’t be true.  Lancaster was a cinematic veteran at the time.  Well, maybe he just wasn’t getting the parts anymore.  Better to star in spaghetti dialectics rather than nothing at all!
Yes, that’s what we are dealing with, a lengthy Marxist soap opera, tedious if it wasn’t so risibly ridiculous.  I knew Marxists were dim but I had no idea just how dim.  Watch it if you have the time or the inclination.  I did by invitation and I had such a fun time.
It’s a side-splitting pastiche of Italian history from 1900 – hence the title – to 1945 and beyond.  As I say, the lead parts are mostly taken by foreigners, but the director has managed to dig up some wonderful grotesques to masquerade as the poor suffering peasants.  Looking at them it’s almost as if, Pygmalion-style, he has managed to bring a lot of gargoyles to life!
This, dear readers, is a tale with a moral, an everyday story of proletarian folk.  It begins with the birth of two boys into entirely different strata of society.  Oh, but not at the same time, you understand; for when Adam delved and Eve span, who was then the gentleman?  First comes the peasant, one Olmo, born into a rather revolting clan known as the Dalcos.  Olmo – eventually to be filled out in adulthood by Depardieu – is destined to be a horny handed son of toil.  Actually, no, he’s destined to be a self-righteous and sanctimonious prig.
After him into this world is thrown Alfredo Berlinghieri, the grandson of the padrone, the landowner, destined to be padrone himself one day and destined to be Robert de Niro.  1900 is their story, the story of Olmo and Alfredo, a story of an impossible friendship of social unequals, or an impossibly funny friendship.  These two will negotiate in their separate ways through the currents and eddies of twentieth century Italian politics. 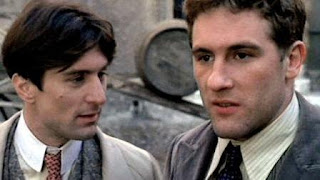 The real excitement comes after the First World War.  Olmo goes to the front, of course, and Alfredo stays behind, of course.  Well, he also serves who only stands and stares.  Into the mix comes a certain Attilia (note the name) Mellanchini, whom Alfredo’s father has employed as a foreman.  Now we have Donald Sutherland measuring up to what must surely be the most bizarre and grotesque part in his whole acting career. 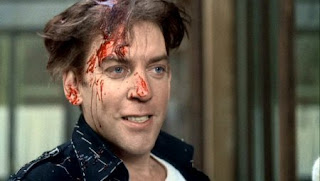 This Mellanichi, you see, is set to become the community Blackshirt.  Oh, but not just that; he also turns out to be a sadist and a sexual pervert.  Into Marx comes Freud, which I assume is the director’s own particular dialectic, the Bertolucci factor.  The important thing is that he is a bit of an epiphenomena, no more than the creature of the padrone, without a thought or a political instinct of his own.  He is hired, if you like, in 1922 and fired in 1943, hired by the father and discarded by the son, those wicked capitalists who take up fascism when it suits them and discard it when it does not.  Simple!  Oh, I should say that the friendship between Alfredo and Olmo does nothing to stop the former allowing Attila the fascist and his gang giving the latter a good kicking at one point.  You see, it’s the class struggle in action!
Wait!  I completely forgot to mention Regina (Laura Betti), the poor relation to whom the Berlinghieris extend their condescending charity.  She turns out to be as weird sexually and in every other sense as Attila, with whom she takes up (naturally), proving to one and all that fascism was brought into the world as a vehicle for poor relations and perverts!  Ah, Regina, how I felt for her when Alfredo introduces his glamorous French wife Ada, a touch of exotic chic by Dominique Sanda.  How will she manage, the embittered Regina muses, among the pigs, the shit and the Dalcos?  Yes, well, give me the pigs over the Dalcos any day! 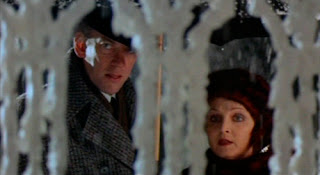 On we go thesis, antithesis and synthesis, a merry Marxist march.  At this point I’m desperately trying not to identify with the fascists (I’m no sex pervert), especially when Attila and his merry band start shooting peasants for whistling the Italian communist anthem badly out of tune.  Obviously these people are no more than rather sensitive music critics. What a pity Olmo wasn’t around, having previously made good his escape after pelting the unfortunate Attila with horse manure.  Sex pervert, yes; coprophile, no.
He turns up again, unfortunately, in 1945, a partisan and a communist; sorry, he was that all along, a socialist with holes in his pocket.  Now he is back, ready to do justice.  Attila has already been pronged and butchered – serves him right – but not before he shouts to Regina, his wife of some years, that their children will reap what has been sown on this day.  And now I call to mind the recent remark by the Silvio Berlusconi, Italy’s comeback kid, that maybe Mussolini wasn’t such a bad chap after all.  A positive saint, I would say, compared with the Dalcos of this life.
Olmo does justice to his old friend the padrone, who is executed...no, not really, only symbolically, by a kangaroo court of peasant grotesques.  Where did the director dig up that munch munch woman – from the local cemetery, perhaps?  The padrone is dead; Alfredo Berlinghieri lives, proving that he is dead.  Confused?  Don’t be, for the padrone is not dead at all.  The struggle goes on, and there is Italy in the last century, after which history came to a full stop, or a Berlusconi, whichever your preference is.  Anything, anything, but a Dalco.
Incidentally this is not movie review.  I’m just having a spot of fun, Ana’s delicious dialectical dance. :-) 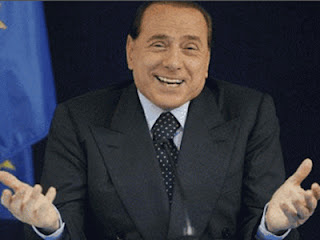