Benedict and the Wolves


In his very first sermon as Pope, Benedict XVI asked the faithful to pray for their new shepherd “that I may not flee for fear of the wolves.” The wolves, it would seem, have proved too numerous and too strong. He has become the first Pope to step down from the throne of Saint Peter since Gregory XII in 1415.


Who are the wolves, you might wonder? The first thing anyone looking at Vatican politics should be aware of is that it is the last Byzantine Court in Europe, surviving all others by several centuries. It combines, as did its long dead predecessors, an outward and divinely sanctioned autocracy with internal politics of bewildering complexity.

The resignation of Benedict, which a great many are refusing to accept at face value, namely that it was for health reasons, has led to levels of speculation and conspiracy theories that even Dan Brown, the author of The Da Vinci Code, could would find implausible and fanciful. I’m no wiser than anyone else but I think it reasonable to suggest that the Pope’s loss of vocation, if that’s the right word, has as much to do with the back-stabbing politics of the Curia as anything else. If he wasn’t exhausted already the poison here would certainly have seriously weakened his system.

If one really wants to understand the Curia then one could do no better to turn to John Cornwall, an expert on papal history and author of the controversial Hitler’s Pope, who aptly described it as a “palace of gossipy eunuchs.” I would simply add treachery and back-stabbing to the gossip, the speciality of eunuchs throughout history.

Apparently Benedict is suffering from a terminal illness; either that or the head injury he suffered on a visit to Mexico last March convinced him it was time to abdicate. The fact that it took him almost a year to make up his mind suggests that it also reduced his decision-making process to glacial slowness. Then there is the Renaissance-style drama: he is being forced out after a recent acrimonious exchange with senior cardinals, or he faces disgrace over the shady dealings of the Vatican Bank. Add to that even more venomous accusations: his fall is attributable to past cover ups over paedophile priests.

There is a lot of tut-tutting disapproval among some of the faithful. In his blog, Marco Ventura, professor of law and religion at Siena University, wrote that “The theologian who held relativism as the worst foe of the church will be the pope who relativised the papacy.” That’s nothing. Cardinal Stanislaw Dziwisz, the late John Paul II’s secretary, is a wolf closer to home. According him “one does not come down from the cross”, a rather interesting interpretation of the papal office. Ignore this; the words were taken ‘out of context’, the Vatican later said, the usual thing when the context, and the intent, is blindingly obvious. Anyway, it seems only fair to note that there is a wider ‘context’ that the Cardinal appears to have forgotten: John Paul twice prepared letters of resignation in case he became incapable. The Pope may be the Vicar of Christ but he is still only human.

I’m not a Catholic; I’m not even a Christian, so why do I feel the need to speak out here? Why? Simply because I hate to see this occasion being turned in to a cudgel with which to beat Christianity in general and Catholicism in particular. I may not be a Christian but I grew up in the time-worn Anglo-Catholic tradition, one for which I still retain considerable respect. What I hate with a passion, as I wrote elsewhere, is ignorance and prejudice and ignorance born of prejudice. I fully agree with John O’Sullivan, who wrote in this weeks Spectator;

...Benedict dealt with the problems he inherited with courage, honesty and surprising dispatch, but often in the face of resistance. That was especially true of the child sex abuse scandals. After an investigation that left him horrified, Benedict not only offered victims and their families sincere apologies; he strengthened canon law to compel Church authorities to inform the police of abuse accusations; and he investigated and condemned powerful figures who had managed to escape censure. But though his zeal never weakened, his energy and ability to pursue crime and the criminals through the ecclesiastical machine did.

Ah, yes, the machine, the Curia, the Court, the Bureaucracy, worse than anything ever faced by a Byzantine Emperor. In his Ash Wednesday mass in Saint Peter’s Benedict appealed to the Church to move beyond “individualism and rivalry.” Aye, there’s the rub.

Benedict never wanted to be Pope; he was his predecessor’s choice-in-waiting. His talents are those of the scholar and the theologian, not the politician. Benedict is no Borgia. Come to think of it, perhaps that what the Vatican needs, a Borgia for the twenty-first century, one who can master the Curia and ensure the continuing relevance of the Church in an ever more complex and fractious world.

It seems to me that the Vatican has returned to the Middle Ages, the time when Popes were the playthings of the Roman nobility, when pontiffs like John XVIII and Benedict IX were forced to resign by a mixture of political intimidation and personal bullying. The nobility is long gone. No, it has not. Families like the Crescentii have long gone; in their place has come the College of Cardinals, the new aristocracy, as treacherous and often as self-serving as the old. Benedict retired simply because his health was no longer equal to the politics. The wolves ate him alive. 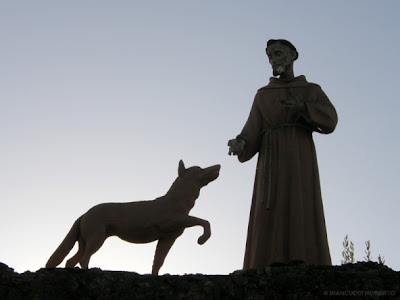