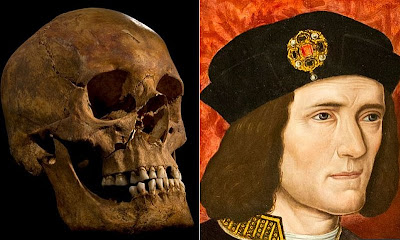 So now we know: the skeleton found under a municipal car park at the end of last summer really is the long lost King Richard III.  I certainly share the excitement of the archaeological team from the University of Leicester: this is indeed one of the most significant finds in recent English history, finally putting to rest a mystery half a millennium old.  DNA testing, according to investigators, puts it “beyond reasonable doubt that the individual exhumed at Grey Friars in September 2012 is indeed Richard III, the last Plantagenet king of England.”
I’m really am so pleased for them.  What academic would not kill for a coup like this?  It’s also pleasing that a story from English history has hit the headlines, displacing the usual tripe about talentless celebrities, even if for only the briefest of moments.  Richard Taylor, Leicester University’s deputy registrar, can be excused a spot of hyperbole – “Today we bear witness to history.”  What tremendous publicity!
Richard was killed on 22 August, 1485 at the Battle of Bosworth Field, the Plantagenets then giving way to the Tudor parvenus.  The skeleton found in Leicester carries mementos of a fairly gruesome death, bearing ten wounds in all, eight of them to the head.  The spine also shows an abnormal curvature, proving in part Shakespeare’s contention that Richard was “deformed, unfinished”, though not nearly quite as extreme as the full description given in Richard III.
He was only thirty-two when he died, after a mere two years on the throne, a throne he had usurped from his nephew, Edward V.  The latest plan is that his remains are to be interred at Leicester Cathedral, though some Conservative member’s of parliament have suggested that he be given a state funeral.
My, my, this is a tricky one, given that on the balance of probability Richard was responsible for the death of Edward and his younger brother, Richard, duke of York, the tragic little princes who disappeared into the Tower of London in the summer of 1483, never to be seen again.  I can’t imagine that any of our modern royal family would welcome a state occasion given the blackness of the record.  Still, the past is the past and Richard, for all his perceived faults, was king of England.
I have to confess to being initially quite lukewarm about the Leicester investigation.  For an academic project I thought there were too many assumptions and far too much speculation.  These things are best treated in a low-key and cautious way.  But it made all the difference, I suppose, not least to the funding, that the archaeological investigation is to be the subject of a telly splash.
Ah, well, such is the reality of modern academia, almost invariably strapped for cash.  If the publicity served a greater good, so much the better.  My greater concern was the involvement of the Richard III Society in the whole project. This would be a bit like involving Doctor Goebbels in a hunt for the remains of Hitler.  Yes, this Society is a partisan organisation, absurdly so.  Richard, for them, is more sinned against than sinning.  For them the real villain of the story is his successor, Henry VII.
The involvement of this Society has come dangerously close to damaging the impartiality of the Leicester team.  From the outset they were determined to advance their own agenda.  For them the discovery of Richard would end the “enormous disparagement” of his reputation.  In what way, one has to ask?  Do bones speak?  Do they proclaim their innocence of past accusations?  I’m tempted to think that some might believe so.  All they tell us, all they can tell us, is that the King’s alleged crookbacked deformities were based on an exaggerated caricature, deformed in shape, deformed in nature.  But few serious historians would have been seduced by the legend.  Hunchbacks, with withered arms, as I wrote last year, do not generally ride into battle.
I’ve said previously that I’ve never quite understood why Richard, who ruled for only two fairly disastrous years, has excited such fascination.  He was a bad king, a bad politician and an appalling strategist.  But for his miscalculations the Lancastrian cause, comprehensively defeated in the so-called Wars of the Roses (it was the Scot Scott who gave it that title) may itself have been buried forever.
His fall began with a crime - the murder in the Tower.  Oh, there is little doubt about that, despite the objections of the Richardians, as anyone who has the least knowledge of medieval records, like Close Rolls and Pipe Rolls, will confirm.
These documents are an exhaustive account of royal grants and expenditure, mention often being made of the most politically insignificant people.  The Princes are there, at least until the summer of 1483, when they vanish altogether from the record, receiving no further mention.  To save himself, and to completely undercut Henry Tudor in 1485, Richard only had to produce them in public.  He could not.  He was Macbeth and they were the ghosts at his feast.
Still, for all that, it’s a great find.  Well done, Leicester, well done the Raiders of the Lost King.  Perhaps you might now take the trouble to find him a horse.  There is a kingdom at stake.