Stands Egypt where it did? 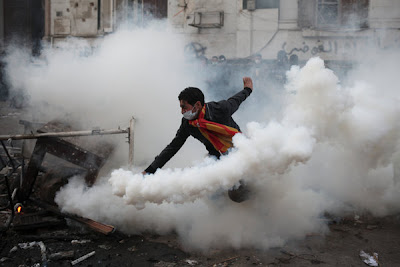 Two years ago exactly I wrote an article focusing on the evolving political situation in Egypt, then the high noon of the so-called Arab Spring (Reflections on the Revolution in Egypt, 6 Feb, 2011).  Of course the title was deliberate, a nod in the direction of Edmund Burke’s Reflections on the Revolution in France, his brilliant conservative dissection of an event that was still well short of its most extreme and murderous phase.  I began my piece by quoting Burke’s most pertinent observation;
The effect of liberty to individuals is, that they may do what they please: we ought to see what it will please them to do, before we risk congratulations.
Now here we are, two years on; now we see what it has pleased the present Egyptian authorities to do.  It’s just as well that, unlike some, unlike the BBC, for example, we did not offer congratulations.  We see that Mohamed Morsi, the Islamic Brotherhood President, is taking the country in the direction of a new tyranny.  Meet the new boss, pretty much the same as the old boss.  Actually, no; for all his faults Hosni Mubarak was at least a secular tyrant.
In my frustrated Cassandra-like manner (who listens to me?) I made my own observations at the time:
What is it, I wonder, that will please the mobs, beyond the departure of President Mubarak? What is to come after Ozymandius has left nothing but footsteps in sand and time? If one tried to find answers here, if one tried to penetrate beneath the surface of transient events, one is best to ignore the reports of the BBC, unbelievably banal in their shallowness and lack of understanding. Jeremy Bowen, their Middle East editor, was heard to say of the Muslim Brotherhood, the fundamental face of Egypt, that they are a “fairly moderate force here…they don’t want to rock the boat too much.” No, let the boat keep rocking; they will be there to steady it afterwards.
Well, now we know.  Bowen’s ‘fairly moderate force’, endorsed by the Economist and all liberal idiots at the time, has been busy, like the Bolsheviks in 1917, concentrating all power in its own hands.  Alarmed by recent developments, thousands gathered in Cairo’s Tahrir Square, protesting that the revolution had been betrayed.  Thousands more gathered outside the presidential palace, chanting ‘leave!’ ‘leave!’ in the empty hope that Morsi would really leave.
Meanwhile, under the guidance of the Brother of the Brotherhood, Egypt slips still further into chaos.  The economy is in ruins and the vital tourist industry is in sharp decline.  I was in the country two years ago and still keep up some of the contacts and friendships I made then.  It really breaks my heart to see how bad things have become, to learn that people are being gunned down in the streets for taking the message of freedom too literally. It gives me no pleasure at all to say - see, I was right; democracy cannot be grafted on to a country with no tradition of democracy.  Now in place of freedom comes a state of emergency and a curfew.  Now in place of Mubarak comes Morsi.
Even Egypt’s most precious treasures have come under threat.  Last year Murgen Salam al-Gohary, a jihadist who claims he has links with the Taliban, called for the destruction of the Sphinx and the Giza Pyramids.  The pyramids have laughed for thousands of years at time, but they cannot laugh at ignorant fanatics who simply pass through time.
“God ordered Prophet Mohammed to destroy idols,” he said, according to Al Arabiya News. “When I was with the Taliban we destroyed the statue of Buddha, something the government failed to do.”
Yes, a nice reminder of a past cultural atrocity and a present warning of what Egypt’s future may bring.  The future may also bring the Salafists, the second most influential party in the country after the Muslim Brotherhood.  They have agreed with al-Gohray’s view, saying that they also want the country’s Pharonic statues covered.
They may as well cover up what remains of Egypt’s democracy as well.  Stands Egypt where it did?
Alas, poor country, Almost afraid to know itself! It cannot Be call'd our mother, but our grave. Where nothing, But who knows nothing, is once seen to smile; Where sighs and groans and shrieks that rend the air, Are made, not mark'd; where violent sorrow seems A modern ecstasy The dead man's knellIs there scarce ask'd for who, and good men's lives Expire before the flowers in their caps, Dying or ere they sicken.