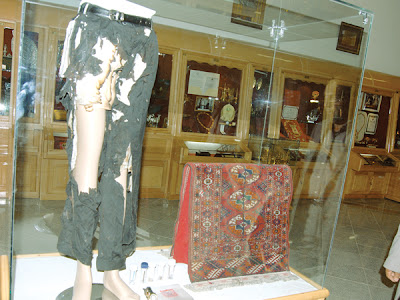 When I was in Taiwan I visited the Chiang Kai-shek Memorial Hall in Taipei, a structure worthy of a Chinese Emperor, there to see mementos of the late Generalissimo, including his car.  When I was in Tunisia I visited the Habib Bourgiba Mausoleum in Monastir, there to see mementos of the country’s first president, including his silk summer suit.
How would you choose to be remembered, what object or personal belonging might best represent your life?  Perhaps a car, or a suit or some other item that would reflect on your dignity or your humility?  Ali Abdullah Saleh, the former president of Yemen, is memorialising his own thirty three year rule in a new museum created in his honour.  And what do you think he has chosen as the central and most personal exhibit, the thing he wants people to remember him by?  This is a man less ordinary.  He does not want anything as ordinary as a car or a suit.  He has chosen, rather, a pair of his scorched underpants.  Yes it’s true – Ali, Ali,  Pants on Fire!
His singed white pants, along with a pair of torn trousers, is the central display in the new museum, set up in a wing of the Saleh Mosque in Sanaa, the capital.  The torn and burnt clothing is a reminder of the bomb blast that almost killed the ex-president during the 2011 rising against his autocratic rule.  Although not yet open to the public, the news of Ali Saleh’s risible narcissism has spread.
Although still a powerful figure in Yemeni politics, he is seemingly wholly unaware just how ridiculous this makes him look, a clear comment on the blind and humourless vanity of certain politicians.  Or perhaps it’s just Arab autocrats that are at fault here.  Can you imagine Hitler, Stalin or Mao expecting the masses to be in awe of their burnt smalls? No?  I certainly can't.
I expect you have already booked your flight to Sanaa, keen to pay your own respects to the Ali Saleh legacy.  You will be pleased to know that the museum holds a further 2000 exhibits, gifts from foreign dignitaries.  There is a Christmas card from Princess Anne that you might want to see.  Just look for the section marked “Spain, Portugal and Hungari” [sic].  I’m not sure if this means that the said card was sent from Spain, Portugal or Hungari, or if some other bizarre logic is at work.  Perhaps the curators think that Britain is located somewhere alongside Spain, Portugal or Hungari.
Meanwhile Hamza al-Shargabi, a Yemeni blogger now based in New York, has set up a page on Facebook, “We are all going to see Ali Saleh pants on fire.”  I can’t wait.