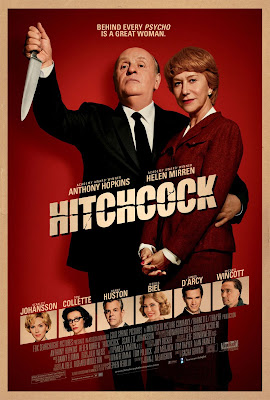 Seeing Psycho, Alfred Hitchcock’s 1960 classic, for the first time is a bit like losing one’s virginity: one never forgets. I was sixteen. It was a slumber party with a group of friends. There was a TV in the bedroom. Psycho was the late night feature. Oh, gosh, it’s so old; it’s so black and white. But that mood did not last, especially after the sudden and wholly unexpected demise of the woman in the shower, the point where the story changed so rapidly that the gears grinded. For some time after no shower came easy. Oh, those screeching and stabbing violin sounds!

Since then I’ve seen several Hitchcock movies, though none quite as compelling as Psycho. Quite recently I saw The Girl, set while the director was making The Birds. This depicted him as a bit of a psycho himself, particularly in his semi-sadistic relationship with Tippi Hedren, the actress he threw to the birds. Now I’ve seen Hitchcock, a more nuanced and balanced portrait, set around the troubled and uncertain birth of Psycho.

Actually it might just as readily have been sub-texted as A Portrait of a Marriage, and a very good one too. Beyond Psycho it tells of the relationship between Hitch and Alma Reville, his wife and amanuensis, a brilliant dual performance by two of the brightest stars in the British acting Milky Way – Anthony Hopkins and Helen Mirren. There is Hopkins, padded out to Hitchcock proportions, Joe, the Fat boy from Charles Dickens' The Pickwick Papers, who wants to make your flesh creep!  There is Alama, the one certain anchor in his life, supportive but not uncritically so.

Directed by Sacha Gervasi and based on Stephen Rebello’s Alfred Hitchcock and the Making of Psycho, the movie opens with Hitchcock at the height of his career. Parading the streets like a Roman emperor after his latest triumph, North by Northwest, he is asked by a reporter if it would not be better to quit while he is ahead. Hitchcock, now sixty and with over forty movies behind him, begins afterwards to reflect on being left behind. Like Alexander, for him there would seem to be no more worlds to conquer. Oh, but there is; there is the real life world of Ed Gein, and there is the fictitious world of Psycho, a recently published novel by Robert Bloch, which brought the mother-fixated Norman Bates to the world.

Hitchcock is all surprises and Psycho is his latest. To begin with it’s a struggle to find acceptance (why not go for something safe like James Bond and Casino Royale?). To begin with Alma is not convinced. Barney Balaban (Richard Portnow), the studio boss to whom Hitch is under contract, is certainly not convinced. He only agrees when Hitch and Alma say that they will raise the finances themselves.

Then comes the visit to the censor. I’m not sure how this sort of thing is done these days but surely not as pettily censorious! Hitchcock cannot resist making jokes, not at all pleasing to the censor-in-chief, Geoffrey Shurlock (Kurtwood Smith). There is that shower scene with Janet Leigh (Scarlet Johansson). Will she be naked, the prurient Shurlock asks? “No”, Hitchcock responds, “She won’t be nude. She’ll be wearing a shower cap.” What I find particularly droll was the debate over whether a toilet should be shown or not. Apparently, up to that time, the great American viewing public had never seen a toilet on screen!

Generally speaking the movie is quite lightweight, with none of the directorial tautness that is such a feature of Hitchcock’s own movies. At points the screenplay is almost as flabby as Hopkins’ fat suit, particularly the relationship or non-relationship between Alma and Whitefield Cook (Danny Huston), a hack screenwriter who hopes to get to the director through collaboration with his wife. But it serves to show a more vulnerable side of the imperious and self-centred virtuoso, concerned that his beloved Alma might be having an affair.

There are good supporting parts. Johansson is a convincing Janet Leigh as is Jessica Beil as Vera Miles, Hitchcock’s one-time star that he was gradually casting into a B light. Tony Colette playing Peggy Robertson, Hitchcock’s secretary, is also worth an honourable mention. But above all - and too little on screen - there is James D’Arcy, a man who was clearly born to recreate Anthony Perkins creating Norman Bates! The imagined and occasional dialogue between Hitchcock and Ed Gein (Michael Wincott) did not work so well, a little too contrived for my taste.

In the end Hitchcock and Alma – the supporting role of Alma really does have to be emphasised – surprised them all. Little or nothing was expected from Psycho by the studio. The movie was given a limited screening with minimal marketing and no premiere. This was a movie that was clearly intended to die its own death. But Hitchcock hams it up, in what must be one of his best off-screen acts of huckstering showmanship. The public is intrigued. In a wonderful moment of high tension, Hitchcock leaves the auditorium just before the shower scene, conducting madly in the foyer to the mad music, as the audience gasp and scream in shock and amazement.