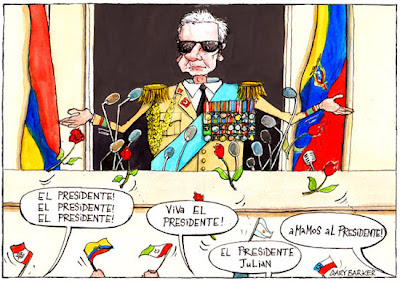 “He that is not with me is against me; and he that gathers not with me scatters abroad”, so says the Gospel according to Saint Matthew.  It’s a sentiment that finds fulsome echo in the Gospel according to Saint Julian.  You know who I’m talking about, surely you do?  It’s our very own Saint Julian Assange of Wiki; our own – worse luck – because he’s still holed up in the Ecuadorian Embassy in London.
Apparently Jemima Khan, a former acolyte, recently went to Utah’s Sundance Film Festival, the showcase for independent film makers.  She was there to see the launch of We Steal Secrets, a documentary about WikiLeaks.  Much to her chagrin, Saint Julian of Wiki denounced it without having seen it (Perhaps it came to him in a vision?).  He didn’t like the title, you see, tweeting that it was “unethical and biased...in the context of pending criminal trials.  It is the prosecution’s claim and it is false.”
Jemima was just a bit miffed.  Stealing Secrets is her baby; she executive produced it into life.  The title, as she pointed out to the Holy One, is actually an observation by Michael Hayden, former director of the CIA, that it was the US government that was in the business of stealing secrets from other countries.  To this He replied “If it’s a fair film, it will be pro-Julian Assange.”  Yes, yes; always beware those whose egos have grown to third person grandeur!
Hell hath no fury like a Jemina scorned.  An executive editor of the New Statesman, she took to its pages last week in a major exercise in apostasy and iconoclasm.  Oh, how are the mighty fallen in the midst of leaking!  From a prophet of new age honesty, Julian has degenerated into an Australian version of L Ron Hubbard, he of scientology fame, who spread the gospel of abject devotion...or else.
How the scales have fallen from the Khan eyes.  She once stood bail for Assange after he was arrested on allegations of sexual assault in 2010.  It was all a fabrication, she was convinced, all a conspiracy, a plot by the Pharisees and the Sadducees to bring down the new Christ.  Now she’s not so sure; now the Swedish women who raised accusations of sexual assault against Assange actually may be worth a hearing.  Most important of all, she concludes, there is no evidence that extradition to Sweden would automatically be followed by on onward extradition to the United States, a narrative that does not fit the Assange script at all. 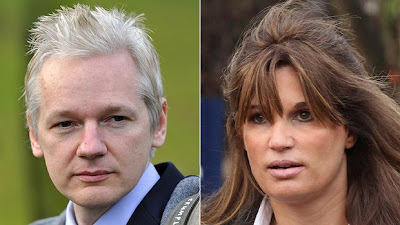 I was never a disciple, so I was wise before the event.  I always saw this man as a self-publicising, egotistical fraud, who’s only objective was the greater glory of Julian.  It amused me to see all those leftist guardians of moral rectitude and women’s rights, all the Jemima Khans of this world, lining themselves up behind their prophet.  Oh, no; he could not possibly be guilty of sex crime; the women in question were obviously lying, rape fantasies, no doubt.  Or at the most Julian’s forced and unwelcome attentions were, in the words of George Galloway, no more than “bad sexual etiquette.”
Last summer the Saint, fleeing those who would crucify him, or send him to Sweden, took sanctuary in the Ecuadorian embassy.  At the time I asked, why Ecuador?  I suppose the reason might be that this banana republic – are there bananas? – is a bastion of truth, justice, human rights and panama hats. Or it might be that Rafael Correa, its leftist president, is almost as childish a narcissist as Assange himself, a little man who wants to cut a figure on a bigger stage.
About this time Jemima asked Julian to respond to the view of the New Statesman’s legal correspondent that he was no more in danger of extradition to the US from Sweden than he was in England.  Answer came there none.  That’s not quite true; answer, of a sort, came from one Mark Stephens, speaking as Assange’s lawyer, saying that Sweden was “one of those lickspittle states which used its resources and its facilities for rendition flights" - that is, sending suspected terrorists to bad places where they got worse treatment.  Actually, says Jemima, the lickspittle state stopped rendition flights in 2006, a fact inconveniently pointed out by WikiLeaks itself.
My pity always went to the poor women who had the temerity to accuse Saint Julian of rape.  At once his wretched army of left-wing disciples got to work, naming and defaming them on the internet.  If they hadn’t been raped they were now threatened with rape.  Pictures of them were also posted with bull’s-eyes through their faces.
As I say, Jemima now thinks there may be a case to answer.  I always thought that there was a case to answer. Assange, as I wrote last year, is fleeing from Swedish justice, O. J. Simpson style, which I take to be a measure of his innocence. Quite right, too. Sweden is notorious for its lack of democratic accountability, its biased system of law and its atrocious abuse of human rights. Then there is Correa’s Ecuador, the victim of another campaign of spite and misinformation. It’s simply not true that the country has no culture of human rights and freedom, not true that dissidents are jailed on trumped up charges, not true that journalists are arrested and TV stations shut down for daring to criticise El Presidente. Assange really would be at home there.
Jemima doesn’t regret, she writes, putting up bail for Assange.  Oh, yes, she does!  “WikiLeaks – whose mission statement was 'to produce ... a more just society ... based upon truth' – has been guilty of the same obfuscation and misinformation as those it sought to expose, while its supporters are expected to follow, unquestioningly, in blinkered, cultish devotion".  That sounds like regret to me.
Hmm, I might be charitable enough to say that there is more joy in heaven over one sinner who repents and so on and so forth, but I won’t!  Assange was never more than an L Ron Hubbard manqué and she was a simple-minded devotee.  I’m minded to quote Kaiser Bill, of all people.  He, in his wisdom, said that stupidity was also a gift of God, but one musn’t misuse it.  Jemima, I fear, is overdrawn at this particular bank.
Oh, the scorpion simply can’t resist one final sting.  Jemima, the poor little rich girl, writes for the New Statesman, that ancient castle of left-wing rectitude.  This is a publication graced in the past by such lions of English letters as Cyril Connolly, H. G. Wells, J. B. Priestly and George Orwell.  Now, aside from Ms Puddle-Duck, it's a showcase for the likes of John Pilger, Will Self, Mehdi Hasan and, best of all, somebody called Laurie Penny.
The latter is especially noteworthy.  If ever there is a museum of bad prose and political idiocy Penny Red – her stamp on the world - will be a cherished exhibit; I feel sure she will. Formerly shortlisted for the Orwell prize (poor George!), she was apparently included on a Tatler list last year of the top 100 people ‘who matter.’  My; is Penny what matters? It seems to me that she would be best placed on a list of fashion victims and ugly women.  Alas, this truly is the age of Asses, Pennies and tiresome mediocrity. 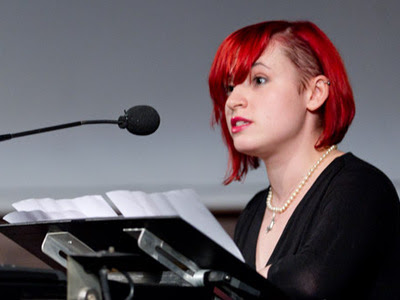