The Tides of Time 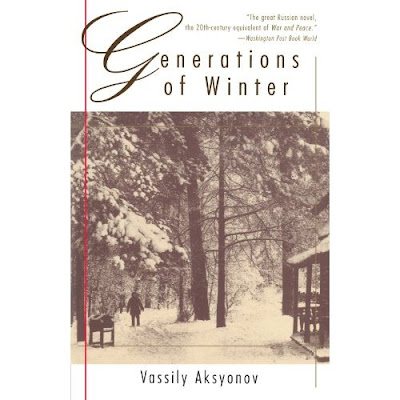 Here’s a literary recipe.  Take a big book, an epic.  Cover a slice of national history, several decades for preference.  Introduce a family over three generations.  Combine real historical figures with fictitious characters.  Season the whole mixture with fleeting moments of happiness and liberal amounts of tragedy.  What do you have?  You know, surely you know?  Yes, of course – you have War and Peace!

Actually on this particular occasion you don’t.  What you have Vassily Aksynov’s Generations of Winter, a book which the Washington Post described as “the great Russian novel, the 20th century equivalent of War and Peace.”  All I can say is that the Washington Post needs to get out more; it needs to wander down the highways and byways of Russian literature.  There are novels far greater than Generations of Winter.  One immediately comes to mind – Vasily Grossman’s Life and Fate, the only modern novel, so far as I am concerned, that really does stand up to War and Peace.

Of course I can’t blame Aksynov for the hyperbole of the Washington Post.  Ah, but just a minute.  That’s not quite true.  I can blame him inasmuch as he offers a challenge to Tolstoy on his own ground.  The knight enters the lists in a wholly self-conscious way, too big for his horse and too big for his armour.  Tolstoy thunders down, upsetting the mount and unseating the rider!  Oh, if only he had been more modest; if only he had challenged Pasternak first.  For Generations of Winter might weigh in better on a first charge with Doctor Zhivago.

It’s certainly a book conceived on a monumental scale, one which tackles Russian history head on, a slice of the twentieth century, from the tranquil mid-1920s, a period of relative liberalisation, through the dark 1930s, the time of Stalin’s Great Purge, on to the Second World War.  It follows the fortunes of the Gradov family, in happiness and in sorrow; and when it comes to sorrow no other nation quite matches .  It follows the fate of Boris Gradov, a leading Soviet doctor, and his children – Nikita, a soldier, Nina, a poet, and Kirill, an idealist.  It follows, in turn, the fate of their children.

The author should know whereof he speaks.  Both his parents were arrested at the height of Stalin’s terror when he was not quite five years old.  His mother was Eugenia Ginzburg, herself a writer, who spent years in the concentration camps of and in Siberian exile, recording her experiences in Journey into the Whirlwind and Within the Whirlwind.  Aksynov, who did not see her again until he was sixteen, was sent to a state orphanage, another kind of gulag, a death sentence for so many children, from which he was rescued by his uncle.

Alas, if only he had been a little less contrived in his approach to the subject matter we might be dealing with a superb novel, perhaps even a great one, rather than one which is simply good.  Obviously I can only talk about the English translation but the style, the narrative technique, seems to me to be course and clumsy at points.  The various ‘intermissions’, moreover, are horribly contrived, self-conscious and embarrassing literary artefacts.

Generations of Winter is also a game of two halves.  Actually – as I subsequently discovered – it really is a game of three parts except the third part is missing!  In large measure this explains why the novel is so uneven.  The first part leading up to the Second World War is assured and focused.  The second part lacks coherence.  In the end, without the sequel, we are simply left hanging, unsure of the fate of the various characters.

I do not think that Generations of Winter is a great book, but it is an honest one.  It’s an uncompromising picture of what life was like in Stalin’s nightmarish utopia.  It’s a picture of betrayal, of lives all but destroyed by arbitrary whims and political paranoia; it’s a picture of unwholesome people like Stalin and the reptilian Beria, chief of the NKVD, the thuggish and criminal state security apparatus.  It’s a picture, above all, of corruption.  Here the author is direct rather than subtle.  At one point Boris Gradov treats Stalin for extreme constipation.  The dictator, you see, is nothing but a sack of shit.

I read this book, a surprise gift, over the Christmas holiday and found myself beguiled, my various criticisms notwithstanding.  This is living history, history mediated through the eyes of real people, who when they are not real are fictions!  I followed the Gradovs and their various fates, never wholly losing interest, though from time to time losing sight of some members of the family.

I was irritated, though, by the artificiality which breaks through from time to time.  There are too many contrived encounters, particularly those involving Townsend Reston, an American journalist, and leading members of the Gradov family.  His meeting with Nina Gradov in the metro during a German bombing raid stretches credulity to the point of absurdity.  Then there is the relationship between Veronika, Nikita Gradov’s wife, and Colonel Kevin Taliaferro, an American military attaché, which takes credulity beyond absurdity.  Here the book descends almost into the comic nonsense of soap opera.

But, as I say, it’s an honest narrative of dishonest times.  I remember an observation from Doctor Zhivago, where a character says that the personal life was dead in , that it had been killed by history.  There must have been many families like the Gradovs, real people, people who maintained decent standards in the midst of indecency, who did their best to retain something of the personal life; who ensured, even in the most trying of circumstances, that they would not be drowned by the tides of time.  For these generations Generations of Winter stands as a worthy testimony.