May the (Gay) Force be with you 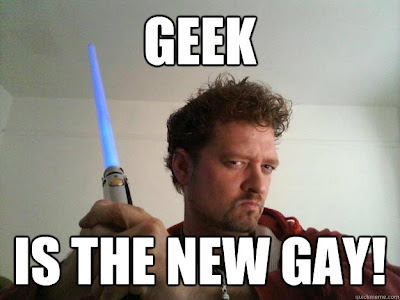 is turning towards the Dark Side! Details of the 2011 census, published last month, reveal that the number of people who identify themselves as ‘Jedi Knights’ has fallen by more than half since the census of 2001. The Force, sad to say, is weakening, with a mere 176, 632 classifying their religion as Jedi compared to over 330,000 light sabre wielders ten years ago. Master Yoda, noting the trend, said “Concerning, this is. Look for the Sith Lord, we must.”

Yes, indeed, the trend is alarming, though it is encouraging to note that Jedi still tops the “alternative faith” stakes, only behind Christianity, Sikhism, Judaism and Buddhism in popularity. They are well ahead of the true Dark Knights, the Satanists, who managed a mere 1,893 adherents, and the Scientologists, with only 2,418 Thetans. My, my, that's all, despite Tom Cruise.

But the prophet who must be most pleased by the figures is Master Richard Dawkins, the atheist-in-chief, whose religion is clearly the fastest growing, with as many as 14,000,000 people in England and Wales of no faith. On the contrary, dear ones; your faith offers the greatest certainties of all!

Mainstream Christianity is still top of the pops, though the number of people identifying themselves as such has fallen from seventy-two to fifty-nine per cent since 2001, leading to claims that their number could fall below fifty per cent of the population in six years time.

The other downward trend is in marriage. It seems that gays have fallen in love with that venerable institution when everyone else is falling out of love. For the first time since the national census was founded in 1801 married couples are in a minority. Never mind; soon the homosexuals will come and make up the numbers.

Now there is a thing.  We had decade after decade of gay liberation, a mighty struggle that brought forth…a pathetic mouse.  Gay marriage is now a flag ship Tory policy, Prime Minister David Cameron waving his little rainbow flag.  Gay love and gay marriage go together like a horse and carriage.  Oh, but there are dissenters, and they are not all Christian fundamentalists.  There is Rupert Everett, a gay actor or an actor who is gay, who said recently that he loathed heterosexual weddings;

…the wedding cake, the party, the champagne, the inevitable divorce ten years later, is just a waste of time in the heterosexual world.  In the homosexual world I find it, personally, beyond tragic that we want to ape this institution that is so clearly a disaster.

Not so, says Cameron, who hopes that gay couples, all complacent and middle aged, will soon form the backbone of the modern Tory Party, a new rainbow county set.  Who else, one has to ask, is left?

Meanwhile, back in the heterosexual world, the Daily Telegraph reports that Sir Paul Coleridge, a High Court judge who started the Marriage Foundation campaign group to promote the institution, said the decline in the number of married couples was a “worrying” trend likely to lead to more family break-ups. He has previously described the scale of family breakdown as a “complete scandal” and warned that people were “recycling” partners instead of trying to fix their marriages.

Oh, well, recycling is the great trend of the age, bed-hopping non-Christians leading the way. This, I have to say, includes Pagan and Wiccans like myself, behind the Jedi, yes, with a professed 68,386 adherents, but making a steady ascent. The beauty of my religion is that it has no rules, other than to take pleasure in pleasure. When we start to follow gays into a parody of Christian marriage I really will know that the game is finally up; that knitting, bring and buy sales, a semi in the suburbs, the rotary club, dogs, slippers and the Tory Party is all that remains.

May the Force be with you, in whatever shape it comes.
Posted by Anastasia F-B at 16:13