Ode to Joy? Get Lost! 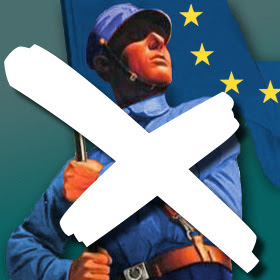 It’s forty years now since joined the European Union, the proudest achievement of Edward Heath, a former Conservative prime minister.  It’s almost forty years since the people last had a say on the matter, deciding that we should stay in on the ‘better terms’ negotiated by Harold Wilson, a former Labour prime minister.

Let’s be frank: we were deceived, our people were deceived by lying politicians, people like Heath and Wilson, whom I consider…  Hmm, I was going to write little better than traitors.  But that’s far too mealy-mouthed.  They were traitors.  I would dearly love to see Heath exhumed and his head placed on a spike a la Oliver Cromwell.  For good measure the head of Tony Blair should be placed alongside for company.  Oh, this is me in my seventeenth century mood.  The past is a foreign country; they did things better there.

Before Christmas the Economist published an article warning of the dangers of leaving the Club.  I love the Economist.  I subscribe to the Economist, conceivably the dullest publication on the planet.  What?  Why read a publication that I consider dull?  Simply because it is a perfect reverse indicator, almost invariably getting things wrong.  I know what to think by not thinking like the hacks of the Economist!

Look at , look at the disaster of the European Union, a vanity project that may very well pull us all down unless we get out and get out soon.  I personally consider the Club to be the greatest danger has ever faced to its integrity as a nation, greater than all the tyrants of history; greater than Philip II, greater than Napoleon and greater than Hitler.  In my more negative mood I take the view that we made the wrong decision in going to war with .  Hitler can have , he can have and he can have the rest of .  Fog in Channel; Continent isolated – is there any better headline?

So, yes, I’m a little Englander; I really do not care to refute the rebuke.  I would rather that than a citizen of the ghastly European super state, a monster conceived in the mind of lying politicians and mendacious bureaucrats.  What a stupid bunch they are.  How can they not be stupid, those who embraced the euro, the one size fits all currency?

I once thought that I might go in to politics.  Not any longer.  My contempt for the profession grows deeper by the day.  It really does not mater what the important issues are, the issues that most concern the people, whether it is over immigration or or whatever; the politicians will simply perform their usual conjuring act.

Democracy is a fraud, a periodic carnival of electoral choice which makes no difference at all to those who have already made up their minds.  I look at Cameron, I look at Clegg, I look at Miliband and I really cannot tell which is which.  Here I am reminded of George Orwell’s Animal Farm.  I am one of the creatures outside the window, Benjamin the donkey for preference.  I look from pig to man, and from man to pig, and from pig to man again; but it is impossible to say which is which.

The simple truth is we are not ‘Europeans’ at all.  We are not like them; we will never be like them.  Most of the Continental nations have a slave mentality, something their history shows time and time again.  They are suited to being governed by autocrats, dictators and bureaucrats; they know no better.  We do.  Our history is the history of freedom, of striving for ever greater forms of autonomy.  The EU is suffocating our past and our traditions.

Only Margaret Thatcher, far too honest to be a politician, eventually understood what entailed.  Of the whole benighted scheme she wrote;

That such an unnecessary and irrational project as building a European super-state was ever embarked on will seem in future years to be perhaps the greatest folly of the modern era. And that …should ever have become part of it will appear a political error of the first magnitude.

She was destroyed for her honesty, destroyed by the like of the reptilian Michael Heseltine and his allies, such a parcel of rogues in a party.  Is there any wonder that the predominant emotion that people have over politicians is one of outright contempt?

I loath Beethoven, I loathe Schiller, I loathe the Ode to Joy, yet another consequence of the EU.  I loathe the memory of Heath; I loathe all who betrayed this nation.  This is no longer a question of political preference.  It’s something altogether more visceral.  So far as I am concerned can sink, the quicker the better.  And it can take its blue star flag along with it.