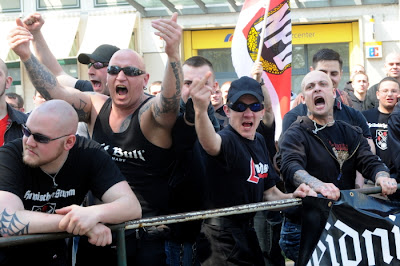 Last month they published an article by one Dirk Kurbjuweit, lamenting that the ‘ugly German’ has once again reared his head, the ‘ugly German’ being racist, arrogant and in thrall to the nation’s Nazi past (Why Germany Can’t Shed Its Troubling Past, 10 December).

It was so different a few years ago.  In 2006, when hosted the soccer World Cup, the country was in a party mood.  It was all wonderfully inclusive; everyone was invited to join – “Sixty years after World War II and the Holocaust, the nation of perpetrators seemed to have come out from under its depression, and the world seemed prepared to take these Germans into its heart.”  Alas, no longer; now darker shadows have been cast along the land, at least according to Herr Kurbjuweit.

This self-flagellation comes not long after the publication of I Sleep in Hitler’s Room: an American Jew Visits Germany by Tuvia Tenenbom, a theatre director in .  Actually the German title, Allein unter Deutschen (Alone among Germans), is a lot less controversial.  I’ve not read this but according to another piece in Der Spiegel it’s a “bold, funny and often outrageously absurd travelogue.”  Bold, certainly, in “outing the Germans as anti-Semites”, though the Germans in question seem to be fairly marginal, the sort of cranks and oddballs one might find in some dingy bar in, say, .

This makes no difference to the masochists of Der Spiegel.  Whip! Whip!; how awful we are, the magazine laments.  Germans are the gloomy Germans once again, it says, though what exactly has changed in six years I can’t quite pinpoint.  OK, there is the aforementioned crisis with the benighted European single currency but seems to be riding that very well.  There is no parallel here with the Great Inflation of the early 1920s, which gave the Nazis an early boost, and the Great Depression of the 1930s, which brought Hitler to power.

The simple fact is that Der Spiegel doth protest too much.  It casts its eye over 2012, uncovering “much that hints at the country’s Nazi past.”  If I tell you that one of the ‘hints’ was a lengthy debate whether a Russian opera singer with a swastika tattoo should be allowed to sing at the Bayreuth Festival, the annual Wagner Party Rally, that might just give a hint over how ‘obsessed’ the Germans actually are.

The truth is simple enough, though far too simple for the editors of Der Spiegel.  There is indeed a neo-Nazi fringe in but that’s exactly what it is – a fringe.  Contrary to what Kurbjuweit alleges, the Germans are particularly anxious to shed their horrific past, too anxious, it might be said, when it leads, as it has in the past, to a collective amnesia.

Der Spiegel is certainly right in asserting that the Nazi story will be with Germany for a long time to come, but their story is, quite frankly, a lot of sensationalist rubbish.  The scandal, they say, is that young Germans in the twenty-first century “feel the need to be neo-Nazis”, thereby corralling all young in a loutish, skin-head dead end.

The one thing Der Spiegel has not rid itself of is a tendency to reach for tired old stereotypes, the same tendency clearly being demonstrated by Tuvia Tenenbom, a tendency, one might even say, to demonise people, which was indeed a tragic part of the German past.  It’s clearly been revived as part of a cynical attempt to increase this tiresome magazine’s circulation.  This is not serious journalism.  There may very well be more Nazis in than the whole of , something Der Spiegel and Mister Tenenbom might do well to consider.
Posted by Anastasia F-B at 16:09