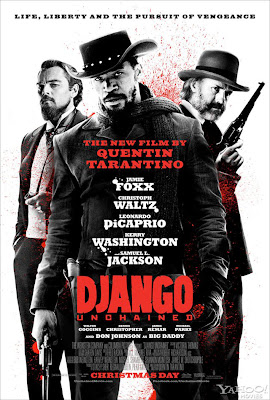 For me Quentin Tarantino is a director of extremes; he pushes me to one extreme or the other. I loved Pulp Fiction, a clever, insightful black comedy, as much as I hated Inglorious Basterds, a juvenile and stupid travesty. I almost gave Django Unchained a miss because of my distaste for his bastardised view of Second World War history and because I’m really not that keen on the Western genre.

In some ways it has the same aim as Inglorious Basterds: it offers a retelling of history, a sort of retrospective revenge movie, with the victim in command. But this time it works. It’s far more than a childish pastiche. It’s a clever, wells-scripted, well-acted, well-scored and, at points, hilariously funny movie despite the darkness of the subject matter. I think this is possibly the most enjoyable pulp history that I have ever seen. It’s obvious that the director had great fun in making it, conveyed to the audience with consummate ease.

We are in the ante-bellum South, 1858, to be exact. The movie opens with chained slaves being escorted half-naked through a freezing Texan night, all bearing the marks of past whippings on their backs. The fate of one of them, Django (Jamie Foxx) is about to change for the better in the most unexpected way.

The party, headed by two slavers, comes across one Doctor King Schultz (Christoph Waltz), an itinerant German dentist who is really a bounty hunter. He needs Django because Django knows the identity of three men he is hunting, and what Doctor King Schultz wants he gets!

The director has managed to obtain superb performances from both Foxx, as the taciturn Django, and Waltz, as the dapper and loquacious Schultz. They are point and counter-point, a perfect harmony of contrasting parts. Although the dentist who is not a dentist disapproves of slavery, he only obtains Django’s release, in the first of the movies violent confrontations, for entirely cynical reasons. After all, like the slavers, he himself is involved, as he puts it, in “a flesh for cash business.” But his evolving relationship with Django takes him to a deeper level of humanity.

Their joint odyssey begins. Django is transformed from slave, to servant, to student, to business partner and finally to friend. Schultz gets himself with consummate ease into seemingly irretrievable situations – at one point he shoots a town sheriff at point blank range – and with consummate ease talks his way out again. After despatching the three hunted men on a plantation, the two are chased through the night by a large mounted group of proto-Klansmen. The scene itself is wholly superfluous, because it adds nothing to the action. No matter; it’s quite hilarious, Monty Python-style, with various members of the gang moaning and squabbling about the size of the eye holes in their hoods!

With the friendship between the two leads deepening, the action moves to a higher plain – the search for Django’s wife, a fellow slave named Broomhilda (Kerry Washington). It turns out that she is being held in a Mississippi plantation called Candyland, owned by one Calvin Candie (Leonardo DiCaprio), whose rotten teeth are as rotten as his soul.

Candyland is anything but sweet. It’s a kind of slave hell made all the more hellish by a vicious white racist, an excellent performance by DiCaprio, an actor I’m used to seeing in more romantic and heroic roles. It’s a place where men are torn apart by dogs, where they are butchered and castrated; it’s a place where they engage in ‘Mandingo fighting’, viscious struggles to the death simply for the pleasure of their master. No sooner have they arrived than the visitors witness a fight in the big house, where the injured loser is dispatched with a hammer.

Here the director recreates slavery as a dreadful abomination, a sadistic crime against humanity. Of course it was an abomination, but rest easy you people who have been trying to discover in chat forums if ‘Mandingo fighting’ was real; it wasn’t. Southern slavers may have been callous but they weren’t stupid. Slaves, after all, cost money, a lot of money. Ironically it was only after the peculiar institution was abolished that some of the more dreadful Southern atrocities began. Slaves were an asset, an investment; free black people were not.


Candie is a racist and a white supremacist. So, too, is his butler Stephen, except he is as black as the night! In what was for me the most startling and unsettling performance of the whole movie, Samuel L. Jackson creates what can only be described as an Uncle Tom from hell. Blacker than black, his scary presence is as compelling as his stare is baleful, masterful in every regard. He haunts Candie like some dreadful familiar.

There is a wonderful ambiguity here that stops the movie turning into a simple white bad black good narrative. The greater monster, perhaps, is not Candie at all, loathsome as he is, but the malevolent Stephen, whose power and influence is based on the inhuman disregard for the suffering, torture, mutilation and murder of his own people. More than that; he is an active participant in their suffering. The death of Candie at the hand of Schultz is gratifying; the death of Stephen at the hand of Django more gratifying still.

If you know Tarantino you will know his fondness for lurid depictions of violence. In this regard Django Unchained does not disappoint. There is also the liberal use of the n word (Stephen is particularly adept), another feature of the Tarantino franchise. So, too, is playful anarchy and the big bang, none bigger than the destruction of Candie Land. Overall the transformations are stunning, none more stunning than the transformation of Foxx from a mono-syllabic victim into assertive folk hero. The apprentice has outlived and out-mastered the sorcerer.

Tarantino tells it like it was. Actually, no, he doesn’t, but he tells it how he would want it to be, in a vicarious and deeply satisfying manner. Who does not dream of that power, the power of the dream factory? Django Unchained is a powerful film, a mature piece of cinema created with a child-like lightness of touch. It’s a movie made by a man who knows movies, a man who manages to create art out of pulp.