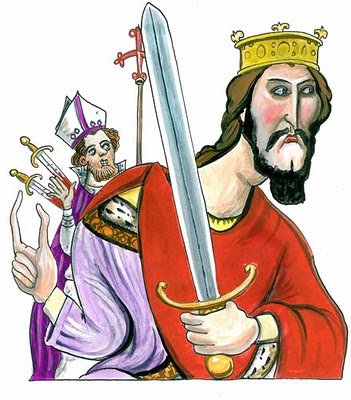 I recently watched on BBC iPlayer the third part of Simon Schama’s interesting documentary on the history of , though this particular instalment was entirely devoted to English affairs.  Specifically it focused on the turbulent relationship between Henry II and Thomas Becket, Chancellor of England, Archbishop of Canterbury and eventual saint.

I admire Schama, a reasonably decent telly historian.  Unfortunately the telly history format inevitably lends itself to silly sound bites and glib judgements.  There was one point in the narrative where the glibness was beyond silly.  It came in the aftermath of the infamous 1170 murder of Archbishop Becket in Canterbury Cathedral.

“All our modern instincts”, the historian said, “seem to say, oh, come on, look at Henry and you find reality; the guardian of the common law, the engineer of government, the smasher of anarchy…and you’d be quite wrong.  Becket, headstrong, infuriating, over the top theatrical Becket made a huge difference.  His view of the church lasted; the Angevin Empire did not.”

Alas, Mister Schama, it is you who are quite wrong, blindingly so!  Yes, of course, the Angevin Empire, that collection of dynastic estates that stretched from ’s northern border all the way south to the , is long gone, but so, too, is Becket’s view of the church.  It was Henry’s view that prevailed, not that of the arrogant archbishop.

Let’s be clear about what we are dealing with here.  Oh, how I resent the skewed view of English history that over amplifies the eighth Henry over the second, a figure now virtually unknown aside from his relationship with Becket.  Henry was, in my estimation anyway, the most significant king in English history.  He was not so much the guardian as the architect of our common law.  He was certainly the great engineer of government and the smasher of anarchy.

And now Becket, what did he represent exactly?  It’s best that you free your mind from any notion that the twelfth century struggle between crown and mitre was over any deep principle of faith; that it represented a desire for religious freedom over state power.  It did not.

then had two laws; the law of the land and the law of the church.  Henry saw no reason why churchmen should enjoy extraordinary privileges not extended to others.  Clerics at the time, even those accused of the most serious crimes, including murder and rape, were much more leniently treated by their own courts.  We have seen, by modern example, to what ends the church will go in protecting its own.

For Becket martyrdom was the ultimate goal, the ultimate political gesture.  It certainly secured the ‘liberty’ of the church for centuries after his death – though at the cost of a growing national mood of anti-clericalism - until another Henry appeared.  Becket, as a saint, may have been a heavenly success but in the long run his cause was an earthly failure.  He most assuredly did not make a huge difference.  In the end his shrine, along with his principles, vanished in the Reformation.  Even Charles I, the only Anglican martyr, who also sacrificed himself on a point of religious principle, considered him a traitor.

Bullying and brutal Henry may have been, but he was simply trying to redress a balance, strengthening a state that had lost so much ground during the Anarchy of Stephen and Matilda.  An over-mighty church was as bad as an over-mighty subject.  Becket, the great commoner, had the misfortune to combine both dangers.  He may have been a good subject of the Pope, but he was a bad subject of the king.  Becket, if you like, represented an extraterritorial power.  Henry represented .